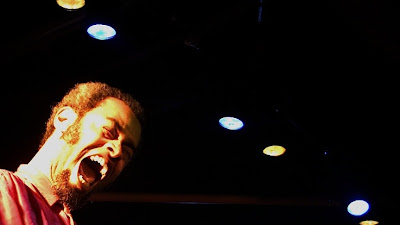 I came to be acquainted with the inimitable Boston Fielder about half a decade ago, believe it or not, on Myspace.  I'd been writing a blog there while promoting my music and building up a following which consisted of myspacers worldwide.  We were mutual fans of each others music.
At some point I'd posted a blog chronicling a particularly challenging period in my journey and the next day, in my inbox there was this message from him... It was raw, straightforward, scolding, as if he'd ordained himself an authority on the subject of Brig Feltus, and it was a profound moment for me.   I'm telling you this up front because there's no use in pretending to be unbiased when it comes to Boston Fielder, the Muthawit Orchestra, or Underground Railroad Broadcasting Alternatives, aka URB ALT.   We have been devoted friends for longer than linear time can define.  We knew each other in another lifetime even.  I'm sure of it.  I am a proud member of the URB ALT Family. 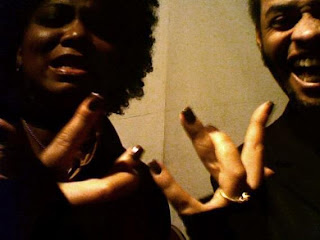 I'm telling you up front because though this is meant to spread the word about the art this man creates, it is unabashedly personal.  Let my honesty about this fact represent my confidence that what you will experience will more than justify my love of all things Muthawit!
So by all means, explore for yourself when you're done here.  You'll find me to be an honest report on the virtues of the man and his art.  I am confident of that much.
The music of Muthawit Orchestra will not be contained in the structure of conventional musical genre descriptions.  But, oh... it is in every way music, encompassing all genres and none all at once... neo-classic, jazz, rock, funk, bluegrass, gospel, experimental, metal, psychedelic, blues, electronica...and it's own indescribable something-or-other which can only be experienced and never explained.  You can forget about trying to put this man's art into a box and tying it up in a nice neat bow.  If there is any thematic, that be it.
You will be challenged.  You will be challenged to free your mind, to let go of your own preconditioning, break loose of the chains of stereotype, archetype, and cultural characterization.   The Muthawit orchestra's sound is beautiful noise that will touch your most guttural conscience and your most ethereal dream scapes as well.  It is frightening and sexy and comforting and confusing truth all wrapped up in compositions you can relate to despite your own conditioning.  If you are afraid of your tail feathers shaking, do not listen.  If you are afraid of arousal, do not listen.  If you fear your own emotions, this is not music for you.  Go and have a cup of tea and carry on.
Every time I listen to this music I rejoice.  lol... I choose my friends wisely, you see...
URB ALT is also Mr. Fielder's brainchild... a community of artists, filmmakers, photographers, poets, musicians, and their admiring relatives and friends, all attempting to live on the cutting edge of free thought and inspiration.   For me personally it has been a place where I can get to know others like me... alternative thinkers who don't quite fit the manufactured grooves of this groupthink society we all live in.    He will say differently but for me it is a movement, by pure definition of the term.   You see, I have been moved more than once since becoming a member of URB ALT.  Movement is the nature of the beast!


Boston's orchestra ensemble Muthawit releases its next album soon and I am honored to have been one of the first to hear its jewels pre-mastering and I couldn't wait til the proper time, so I'm telling you all about it now and getting a jump on all the promotional hype that's coming down the road closer to release date.
As far as I'm concerned, the character of the artist will tell you a lot about their art.  This man is extraordinary in every way that I know him, and has many layers of depth, not to be digested all at once.
Being his friend is a constant temptation to be greedy. There's stuff I just intuitively know about him but don't have to think about most of the time because it's beneath the surface.  His surfaces, when you meet him, are slow, and easy going, and gentle, just like his southern drawl.
But don't be deceived.  Every now and then he says something or does something and I'm reminded about that other stuff beneath his skin... things that can be intimidating when one considers to look straight on.
(Do you think people understand you? Not really. If they did they'd run...)
I gotta look with sunglasses, because he's like the sun.  Most know the sun is strong, so we resist the urge to look at it straight on.  The timid don't bother looking at all, won't even stand naked in its rays for fear of getting cancer, and in the process end up with vitamin deficiencies because of it. The foolish, in their greed, forget and try to look straight into it, and end up with scorched corneas.
That's what he's like.  Seductive ease on the surface, and raging nuclear energy underneath!  His music is evidence of all that stuff beneath the surface, organized a bit, and recorded for posterity, which is a good thing because his sub-surface stuff evidently doesn't like repeat it self in order to keep you on your toes!
As if to prove my point, while I was writing this last bit a minute ago Fielder emailed me a disclaimer warning me not to hold him to his answers because he plans to contradict himself regularly over the next few months... Schizophrenia Convenia he calls it apparently.. ( one of a thousand Bostonisms I've had the pleasure of cracking up over all these years.)  THEN  a minute or two later, a post-post-disclaimer requesting to add Igor Stravinsky, Samuel R. Delany, and Jack Kirby to his influence list... Did I ask for an influence list? Perhaps he was referring to his heroes... Uncle Baldy, and Co...  He also informed me that this is one of a handful (literally) of interviews he's ever allowed.
What? I haven't said much of anything about the new album? Perhaps you should go back and read this posting again and pay attention this time.
There's an appetizer on URB ALT's Sampler Dos which was just made available (for free!!) recently.  Come back after the interview and click the link to get to it!
URB ALT Sampler Dos
Other than that?  You'll just have to wait! 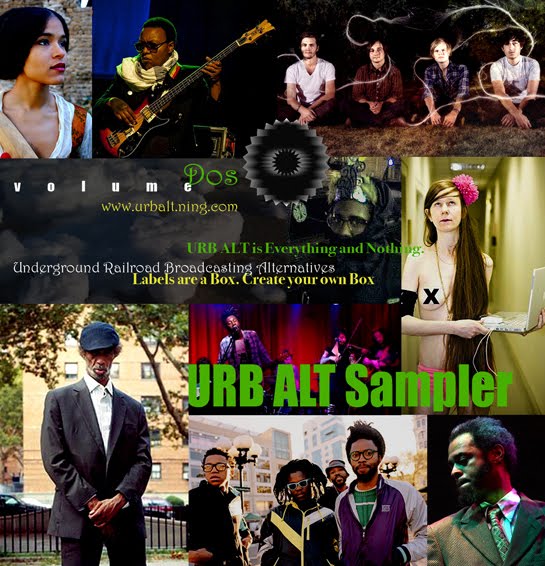 Below is a quicky email interview I sprung on him today without warning.  These are his off-the cuff answers.  Thank you Boston for your friendship, for your music, for your wisdom, and for your most admirable existence!!   May your purse reach you...
What is Muthawit? A loving homage to my elders, peers, children and folks who use common sense.
When did you start Muthawit? When I was 7 years old.
What was your inspiration for its creation?  My grandmother's singing voice and my grandfather's speaking voice.
What is the Urb Alt Movement?  Following the North Star is a movement that inspires me personally but I wouldn't call URB ALT a movement.  The financial component would make that hypocrisy.
What makes the Urb Alt Movement important in these times?  I don't know that URB ALT is important.  Is making people feel good about themselves and others enough to say that it's important?  Hmm.
Would you compare Urb Alt with other movements in music history? Pouring glass as slowly as possible into a pitcher.
What kind of people are participating in your movement?  People who probably don't consider it a movement because movements tend to have a head, the head is lopped off by history and then it dies, is placed in a museum or cryogenically frozen in a state of mediocrity.
Who are your musical heroes past and present day?  Uncle Baldy, Marvin Gaye, Alice Coltrane and that old dude who used to sit on the front row of the church is Tupelo and chanted "Yap, Yeah, Yap, Yeah" during Reverend Pulliam's sermon.
In 10 lines of PROSE or less, describe your musical compositions in poem. "Beauty. Booty. Baby. Bounty. BOOM."
Do you think people understand you?  Not really.  If they did they'd run.
Does being understood matter to you on a personal level?  It means everything and nothing.  Too much to do.
Does it (being understood)matter to the successful spreading of the music?  Only if the music is good does it matter and even then pirates will hijack it on the seas of change before the purse reaches the hands of the chosen.
What do you believe your art contributes to the world?  Joyful cacophony and a good reason to get out of bed or stay in bed depending on the situation.
Is there a subject matter you are afraid to write about?  No.
Is there a subject matter you love to write about?  No.
What is the story behind your new album's title Men and Women?  The death of individualism, the rise of the IRS in the micromechanics of governing and the joy of watching tadpoles swim downstream.
What was the most joyful moment in creating the music on this album?  Mixing PMS Junkie.  It was a bloody good time.
What challenges did you face in making this album?  Tenant revolt.
Is your music influenced by any esoteric or ethereal experiences?  Mainly dead people who walk with us and share our experiences.  They like to dance and eat popcorn.
Did you have any experiences of transcendance during the creation of the music on Men and Women? If so, explain.  I got regular sleep for the first time in well over a year due to roommate overhaul.  It released a torrent of positively kinetic energy.
Which song is your favorite and why? What's it about?  My favorite didn't make the album cause it hasn't been written yet.  It'll be the greatest song ever written in history.  Better than anything Lennon and McCartney or Liberace could produce on their best day.
When will the album be available in stores?  May 9th.  Mutha's Day.
What are your thoughts on overcoming incomplete paradigms in life?  A paradigm by nature is complete.  It's a simple signpost of change that has served it's purpose.
What are you dreaming up for the near future artistically?  Children.
What are you dreaming up for the near future personally?  Protection.
Posted by Brig Feltus at 3/30/2010 06:09:00 PM