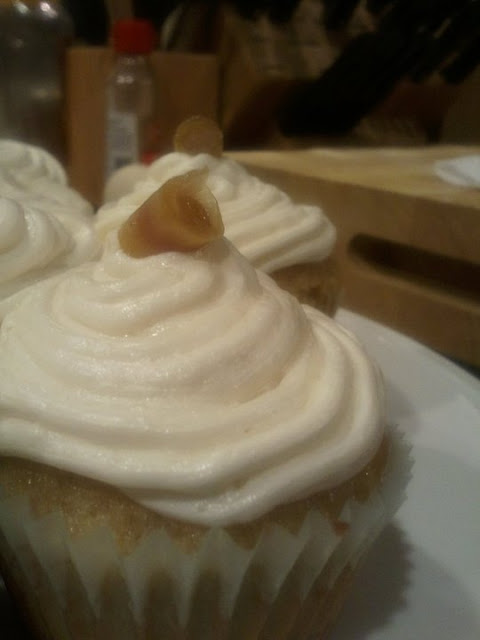 These cupcakes are part of the plans for my baby sister's bridal shower coming up in a couple of months.  We are doing a Thai themed menu, so it was important to me that we don't just have some generic flavor cupcakes that don't fit in with the distinct flavors of the Thai food that will be served on that day.  This is the first of 3 different flavors planned for the cupcakes for that party.
The subtle exotic flavor of lemongrass infuses these cupcakes for just a hint of something different.... lending a bit of a tea-like flavor with a hint of citrus.  I think I am in love.  My first run of these was a bit too sweet but I think I'm happy with the alterations I've made and that you will love these as much as I do.  For this recipe you will need to look up my recipes for Vanilla Bean Cupcakes and Buttercream Frosting (American Style).  You can find them both in the Find It directory in the column to the right under several obvious categories, or perhaps if you're lucky the links at the end of this post! xoxo


For the Lemongrass Simple Syrup:
4 stalks of lemongrass
5 cups of water
4 cups sugar


Start by getting your Lemongrass Simple Syrup going...
Chop up your lemongrass into half inch bits and bring with the water to a boil in a large pot.
Once boiling, add the sugar, reduce the heat, and simmer for at least an hour.


While that's going, make your cupcakes just according to the recipe directions and get them in the oven at 350 degrees to bake.

While your cupcakes are baking and your syrup is cooking down, make your buttercream frosting and set aside.

When your cupcakes are done baking, remove them from the oven, and while they are still hot, dip each one, for about 3 seconds into the lemongrass syrup so that it soaks a bit into the top, then set aside to cool.

Return the remaining syrup back to the stove and cook again for another hour or more, then cool completely.  You can speed this by placing in the freezer for a while.
When the syrup has cooled it should be a loose honey-like consistency.  Strain off the lemongrass and set aside
Once cooled you can fold 1/2 cup of this syrup in to your frosting til thoroughly mixed, beating again if you need to in order to properly incorporate it.

Frost your cooled cupcakes and they're ready to go!!! I garnished mine with a bits of the cooked lemongrass that I strained out of the syrup. Enjoy!
By the way... SAVE THE EXTRA SYRUP AND REFRIGERATE.  IT IS RATHER TASTY IN COCKTAILS!! 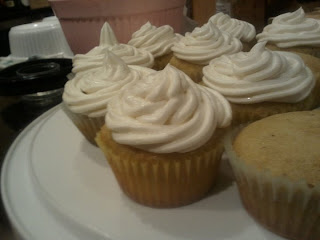