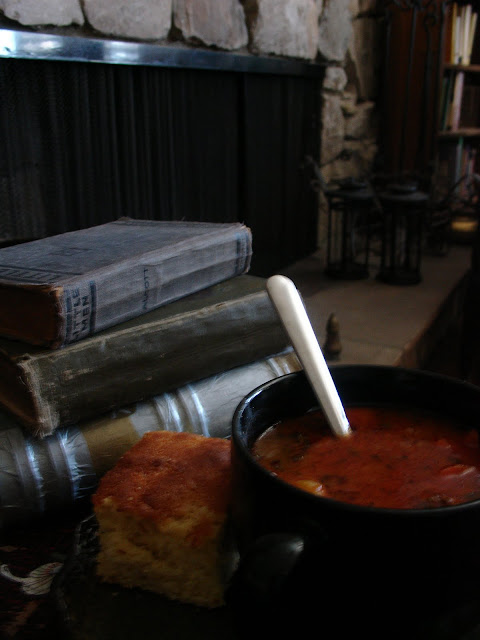 California weather rarely dictates more than a light sweater, but where we live, at the foot of a mountain range in desert-like conditions... warm days, and cool nights.  When the winds do blow in the wintertime, and the nights drop down into the 40's and low 50's we think we're going to start sprouting icicles.

Of course, this is not a rational thinking, but we have to make due with the variations in weather that we've got.  So yesterday, in celebration of the beginning of our winter winds, I decided to make a soup.  The Pyrate and I stopped in our local grocery store and I was planning to buy some lentils and make some curried dahl, but then I changed my mind because we have a big chunk of smokey black forest ham left from Thanksgiving, (you can also make this meatless...) and so I thought, what about a nice green pea soup... But I wanted to take a short cut and use frozen peas instead of dried ones, and that made me a little unsure, so whilst browsing the frozen vegetable aisle, beautiful packages of organic Butter Beans caught my eye.   I love butter beans.  They're kinda similar to lima beans except they have a bit smoother, waxier, creamier taste than the grainy, green flavor of lima beans.

That was it!  "This is what we're making tonight!!  A soup!! With butter beans!!"  The Pyrate was not amused at all.  He is not necessarily an automatic lover of legumes, and peas, limas, and that sort of thing.  Come to think of it, if I'd told the Austrian in advance what I had planned he'd have protested immediately, claiming he did not at all like soup.  "It's a waste of time, and it's not very filling," would be his claim.  The Pyrate just stood there silently frowning skeptically, yet resigned to years of experience that he really didn't have any say in this situation... unless it was his birthday... then he'd get about a 30% vote.
Anyway, I built this soup around Sunday's farmer's market goodies already in my kitchen, and made the butterbeans the star of the show! 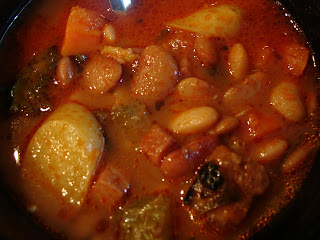 It's a hearty soup with large, chunky bites, a tomato broth, fresh herbs, and the unusual addition of a huge handful of chopped fresh kale I just happened to have leftover from the weekend.

How did it go over with my men?  Well, the Pyrate was standing watch over this soup long before it was done, reveling in the fragrance, and as soon as he was permitted a bowlful of its goodness he gobbled it up in a jiffy, complaining that his bowl was too small!  The Austrian never mentioned not being a fan of soup.  He simply sat next to me, frantically slurping it up, burning his mouth repeatedly because it was so good, he couldn't wait for it to cool!  When I was half way through my portion, I looked over to see that the Austrian was leaning back in his seat, rubbing his belly with one hand and loosening his belt with the other.
I am changing his attitudes about certain foods, one recipe at a time!  I freeze this soup in individual, microwaveable containers so that it can be taken to work for lunch whenever we like.  So making a big pot never goes to waste.  This recipe will serve 8 generously with leftovers.
Make this soup any time you want to warm up, or even in the summer as its fresh vegetables are perfect anytime of year with nothing more than a hunk fresh baked cornbread and a glass of lemonade!

P.S.  Just after I posted this recipe, I got a text from the Austrian... who is at work: 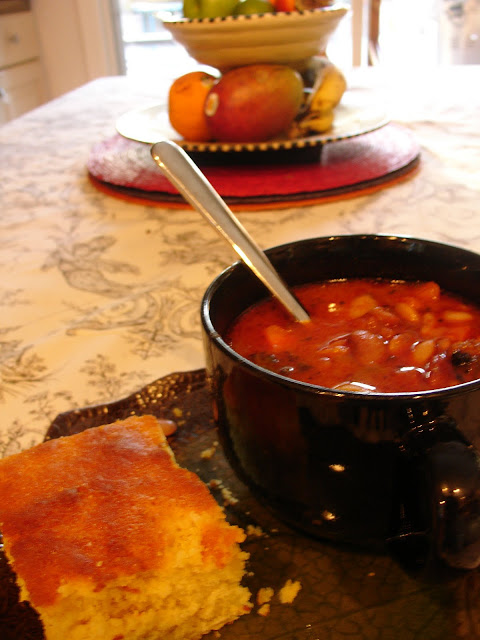 THE PLAYERS: (your grocery list)
Butter Beans (Three 16 oz. packages of butter beans from your grocer's freezer section.  If you decide to be adventurous and search for the dried version, go ahead.  You'll need to soak them for at least 8 hours then cook them with an extra 2 cups of water added to the recipe, for 3 to 4 hours until the beans are tender.) Onions, Garlic, Celery, Carrots, Kale (You'll need one full bunch.) Potatoes (Use a waxy variety of potato, such as Yukon Gold, fingerlings, baby red, etc...They will hold up better in the soup's slow cooking) Smoked Ham (optional)  (I used about 24 oz of Black Forest ham cut into 1 inch cubes.  You can also substitute cooked turkey or chicken or make this completely vegetarian as well.) Canned Crushed Tomatoes (I look for canned tomatoes that are canned fresh at their source, organic, and I like the Italian companies for the quality of the tomatoes.  You'll need one 24 oz can.) Broth (I used 32 oz of organic, free range, low sodium chicken broth.  Vegetable broth can be substituted) Tarragon (fresh tarragon is a nice compliment to this soup!) Bay Leaves (You'll need 2 bay leaves) Sage (Your grocer's produce section should have fresh sage.  If you can't find it, substitute 2 tablespoons of dried rubbed sage.) Sea Salt, Black Pepper, Cayenne Pepper 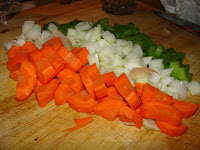 Make a mirepoix  by cutting up 1 large onion, 3 stalks of celery, 5 medium sized carrots into a large, chunky dice around the same size or a bit larger than the butter beans. 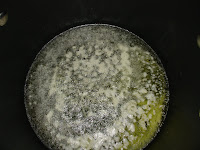 Saute in 1/2 stick of melted butter, in the bottom of a large stock/soup pot just until onions are slightly transparent.

Add 1 tablespoon of sea salt, 1 tablespoon fresh ground pepper, and 1 tablespoon of cayenne.
Add 1 16 oz can of crushed tomatoes.
Add 32 oz of broth
Add 1 cup of water
Bring to a boil.
Reduce heat and cook for 1 hour on low heat, or until beans are tender.