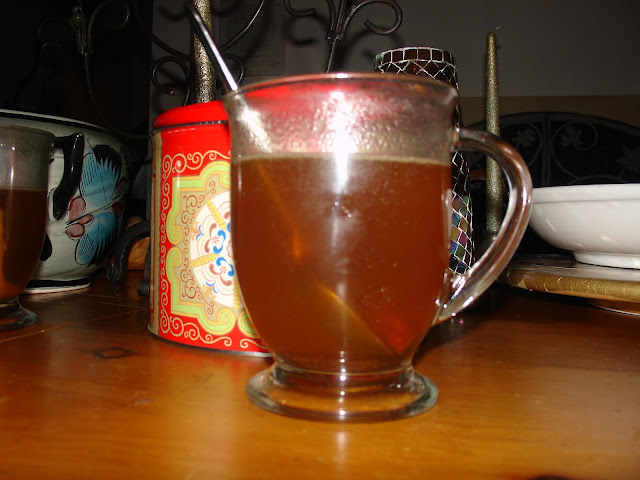 Nothing says cozy like the sweet and salty warmth of hot buttered rum... except maybe the sweet and spicy warmth of mulled hot apple cider.   If you like both of these, then you'll love the two flavors together combined for the ultimate winter treat!  This is not for the children.  Put the children away, and take a moment for the grown-ups and enjoy this blissfully.

Apple Cider  find this in your local grocery next to the apple juice. Nutmeg I keep hole nutmeg on hand in my pantry because it stays flavorful longer than ground nutmeg.  I like to grate it myself just before it will be used so that the flavor is most impactful.  you'll need about 1 teaspoon of ground or fresh grated nutmeg for the butter batter.  Cinnamon Ground:  you need two teaspoons of ground ginger for the butter batter. Sticks: you need a stick for each glass, and 3 sticks for mulling the cider.  whole cinnamon sticks or bark can be found in every normal grocery.  however, i like to use the cinnamon bark from the Indian grocer.  It's not curled and looks like big slivers of bark from a tree... which is what real cinnamon should look like.  if you go to countries that traditionally grow cinnamon and use it widely in their foods, you'll only find this kind of cinnamon, not the neatly curled sticks you find widely here.  at any rate, you'll have a satisfactory result either way.  i'm just trying to practice the art of consuming closer to the source when i can, which means less processing.   Whole Star Anise also found in the spice section.  don't substitute the ground anise.  look for the star anise.  it actually looks like little stars. Dark Rum any dark rum will do, however i suggest you use the best rum you can afford and the darker the better.   Butter  1 stick of salted butter set out ahead of time so that it's at room temperature.  it will make enough butter batter for making the 4 serving recipe here, with more left to store in the fridge for later use when you get that feeling again in a few days... Demerara or Turbinado sugar.  you'll need 3 tablespoons for the butter batter.  Orange Peel you'll need to cut 3 inch long strips of orange peel from one orange being careful not to take too much of the white pith underneath.  You'll need one strip for each cup serving.

Put your cider on.  I use a metal teapot and put the cider in with 3 sticks of cinnamon and 3 star anise  stars.  Keep the fire down low.  Do not allow to boil.  You want this to steep, not cook.  Allow to simmer over low heat for at least half an hour then it's ready to use.

In a plastic bowl with a lid, mix 3 tablespoons of sugar, 2 teaspoons of cinnamon, and 1 teaspoon of grated nutmeg.  Mix well with a spoon.

Place one orange strip and one cinnamon stick in each cup.

Place 1/2 teaspoon of the butter batter in each cup.

Pour hot mulled cider over the butter batter in each cup up to 2/3 of the cup.

Add rum to take up the last third of the cup.

Butter batter will melt and float to the top.

Give each person a spoon and allow them to stir their own.