How to Brine a Turkey (the best turkey I ever had!) 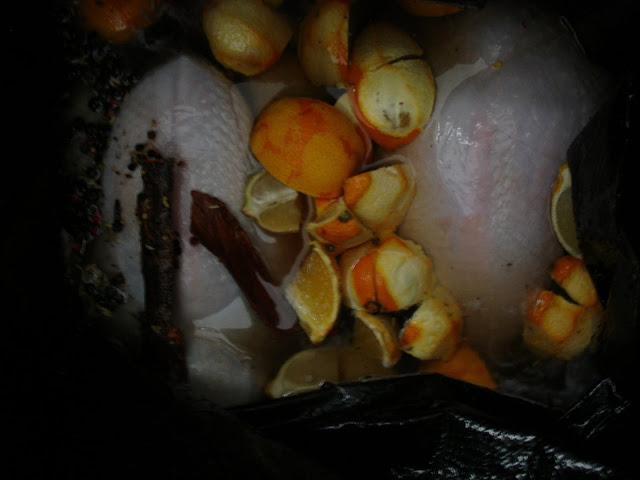 I'm gonna skip my usual recipe format and just write this one out freestyle.  I should tell you that the first time I tried this, it was with a 22 lb Turkey and I use instructions from the Nigella Lawson cookbook called Feast.   The process of brining is not necessarily about seasoning as much as it is about locking in moisture.  You leave the turkey in the brine for a number of hours, then remove it, wash it off thoroughly, and then continue to regular cooking. 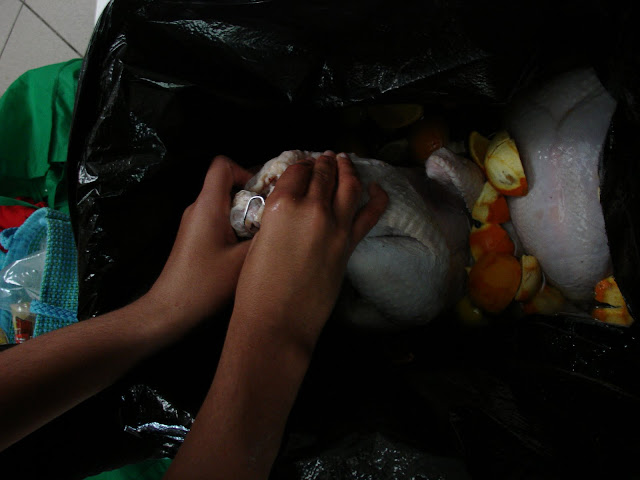 The first time I did this, after the brine, I stuffed garlic cloves and rosemary under the skin,  and stuffed oranges, apples, lemons, and pears into the cavity, gave it a bit of fresh ground pepper, brushed the skin with a bit of olive oil and popped it in the oven to bake!  When we sliced into that turkey, it was soooo juicy!  The juiciest turkey I've ever had.  The Austrian, who doesn't really like turkey because it's relatively dry and fatless, was converted!  And at the end of dinner there was nothing left but a skeleton. 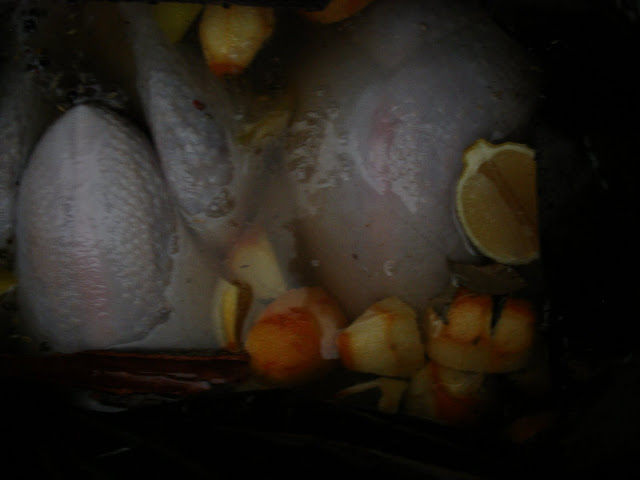 There's something about the combination of salt, sugar, maple and vinegar that transforms the turkey, causing it to form a seal that holds in the juices and you almost cannot go wrong.

Make a note of your time schedule.  Proper brining takes about 1 hour per pound of turkey, so figure in how many hours you need to brine your turkey, then start it exactly that amount of time prior to the time you need to get it in the oven to roast.  You'll need to know how long you need to cook your turkey according to how big it is. 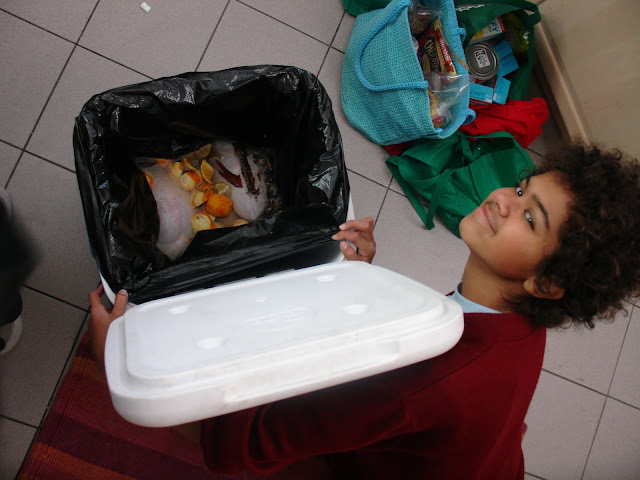 I'm using two 12 pound turkeys this year.  No real reason other than the fact that the only 22 pounders I could find were injected  with salt water.  That is a big no no!!  There is a distinct difference between a salt water brine for a few hours and salt water injected into the turkey meat during processing.  First of all the injection of water into the turkey is deceptive because it makes the turkey look like it's more meat than it is.  that water will cook away in the oven, and the per pound price you paid for the turkey is by the weight including all that salt water, which is dense and heavy.   So I don't ever suggest buying a turkey that has been treated this way.  Buy organic, free range, 100% natural, vegetarian fed turkey.   You can get these everywhere and the price is not so much different that you will feel any pain.

Alright, so that's out of the way.   Gather the following: 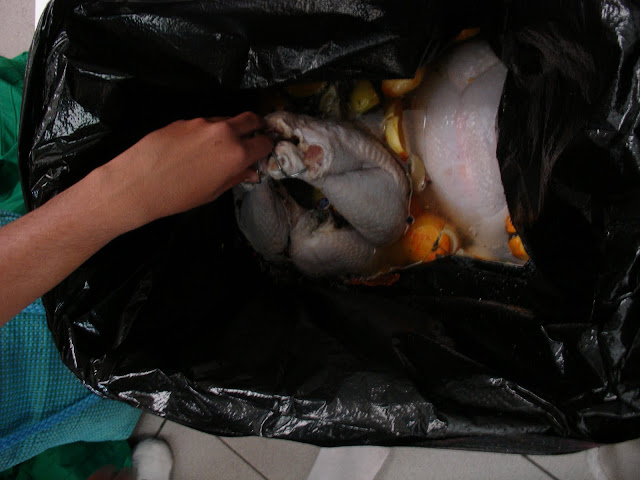 Alright, so now you have your spices and other ingredients, you need to decide where you will store your turkey.   Last time, I used a 13 gallon galvonized container with a lid, and kept the turkey in its brine in our garage because this time of year it stays around 35 degrees.  This year I used an ice chest cooler because the weather is not as cold as in years gone by.

If the weather is cold enough you can put your turkey in an covered container outside in the cold while it is brining.    If not, you'll want to to the cooler chest concept like I did here.

Put a clean large garbage bag into your container.

Place your turkey in the bag, breast up.

In a large mixing bowl, mix together the rest of the ingredients and mix with enough hot water to dissolve the salt and sugar.

Pour this mixture over the turkey.

Then add enough cold water to the bag to cover the turkey completely. 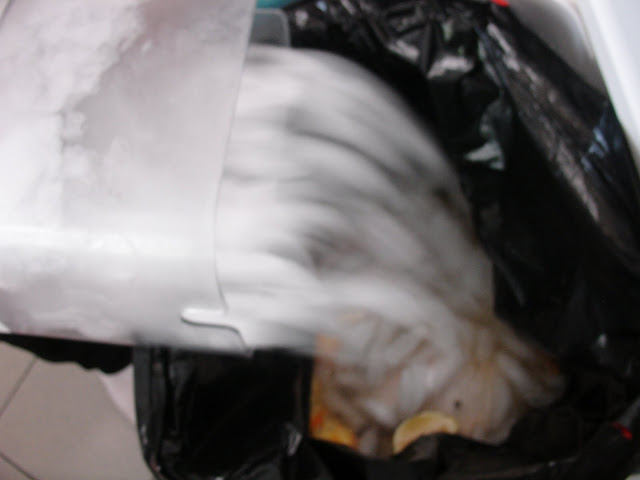 Layer the entire thing with ice, so that your turkeys stay cold.  (only needed for the cooler chest method) 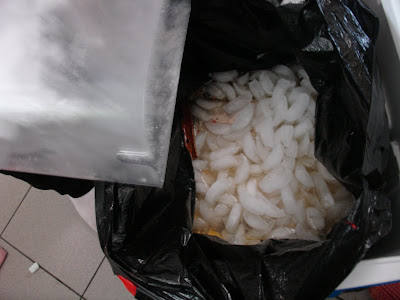 Draw up the bag and twist down, letting as much air out as possible. 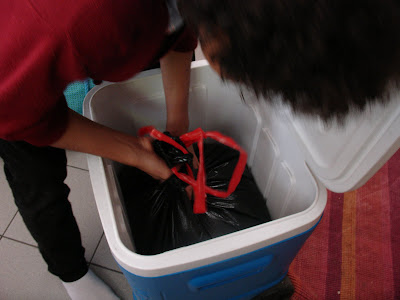 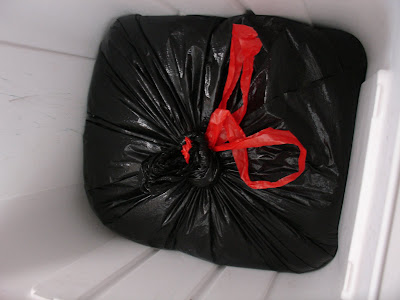 Place in a cool temperature 40 degrees or lower.

The turkey needs at least 1 hour of brining per pound.  You can, however leave it for up to 24 hours in the brine.  Half way through the time, turn your bird over.

When it's time to remove it, discard all of the spices and herbs and rinse/wash your turkey thoroughly under cold water for about 4 minutes.

Proceed as you wish to season, stuff, cook etc...