sorry to those of you who won't understand the intra-ethnic nuances of this post... and to those who don't know me, i promise you that i will only go gangsta to protect my child.  i promise.   wouldn't you?


SO, the pyrate had a run-in with some fellow african-american boys at his very suburban middle-class neighborhood school last week before break started.   they approached him aggressively and got in his face and wanted to fight him.  for no reason, and despite the fact that they are all about a foot shorter than him, and none quite as fit.

well... a few weeks earlier they were taunting him and saying he "wasn't black".   yeah.   the pyrate is of african, native american, and german decent, and has a private school education the first 6 years of his school career.  he listens the most to bands like deathcab for cutie, rage against the machine, nirvana, and nine inch nails and lately he's stuck on playing leadbelly songs on his guitar... repeatedly.  he's also a science buff, a skater, and a bit of an afro-punk.  this gets him a lot of grief in public school. 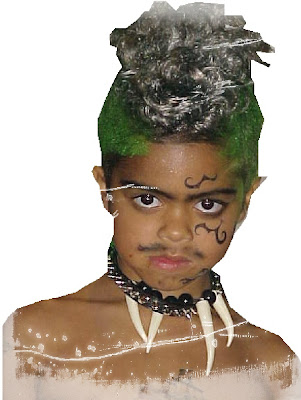 so, anyway, these kids walked up on him.  he had a few choice words (of the intelligent sort... rattled off the names of some very impactful people of african decent that they could not identify and then asked them who wasn't black...) then kept walking.  so last week, they took it further and walked up on him and got in his face. the pyrate says they were close enough that he could feel their breath.   he told them he was not going to fight them and walked away.   they yelled after him a bunch of epithets varying from white boy, b*tch, p***y, and other things.  he kept walking.  these boys are all smaller than him and he could have easily taken out a couple quickly and then scared the others enough to leave him alone, but he walked away... like a shaolin monk.  lol...

later that day, in the gym locker room, they watched and waited as he was changing clothes for gym class, and as he was pulling his gym shirt over his head one of them hit him very hard open handed in the center of his back... hard enough to leave a mark.  the others broke into laughter as he winced then shouted at them to never touch him again.  then he finished changing and walked away... like Dr. King, Jesus or Gandhi would.   he is not traumatized this time because he thinks their motivation is ignorant.  (he's been raised with a strong education about who he is ethnically... so that's much easier for him to deflect emotionally than say... being called gay.)

anyway,  the incidents have been reported, but the proper school authorities were already gone for the day when i was able to report it.  i'm proud of my son.  he's a much more confident and courageous kid than i was at his age... or than he was a few months ago.   we had actually had a good laugh about whether or not he thinks of himself as black.  he raised his 12 year old fist and grinned at me with the biggest nerdy grin.   i said, "say it loud!"  the pyrate said, "i am black and i am proud."  just like that... no conjugations like james brown did it.  like the black nerd scientist, afro-german, punk-pyrate, skater boy that he is.   so all is well.  i plan to be very proactive day one back to school after the break with the proper school authorities.  perhaps a conference with the kids parents, and i will press for middle school version of justice.  so all is well.  no trauma.

excuse me a moment. (but if a muthaf*cka EVER lays a hand on my son again... little wanna-be gangsta suburban fools might get to meet his momma who is straight outta COMPTON.  the pyrate's people roll DEEP! )  BWaaaaahaaaaaaa!!!
*Not really, ....but I'm just sayin'....


i am the type to love a good rant when it's appropriate.  i could rant thoroughly about this issue and the surrounding issues of race relations within a culture.  you see this world wide, and not just with african americans.  but there is a very deep seeded culture of tension between different so-call groups of african americans... based on the color of skin, texture of hair, economic status, etc... that dates back to the times of slavery when the slaves were divided depending on whether they worked in the house or in the field.  they were pitted against each other in many very subversive ways.

it infuriates me when the prejudice goes on in either direction, from either side.  it is all hate and has nothing to do with solving whatever is really bothering those who are hating.    but you would think in this day and age this would be all but just an memory of attitudes of the past.  obvioiusly not, when 12 year olds are taunting each other with such ethnically slanted crap.   then there's the association between so-called affluence and sexual orientation which is completely unrational and makes no sense at all.   we should be teaching our children wisdom and not hatred.  but where are our wise men and women???  when i discover them, i keep them near, use them as role models with my child.

i have a lot of connection to what the pyrate experienced with these boys.   something similar happened to me as a kid and i didn't shake it until my mid to late twenties.   the trauma can run deep.  children... most children have self images that are still forming in their middle school years.  the behavior of these boys says a lot about the climate of the schools nowadays and of the homes that children come from.  it is dangerous behavior that can scar for life.

so, knowing what i know, i added that last bit in parentheses because parents who teach their kids to hate, to judge, to label, to bully, to insult, to be violent, to be angry, to be anti-social, need to know how the parents of your children's victims feel when they find out your child is committing crimes agains their child.


woe to you and your children.  woe to you, because your child might slip up and behave this way with a kid whose parents are NOT as civilized as i am....  who are not as much of anti-violence hippie as i am...  they might slip up and attack a kid who, unbeknownst to them has also been brought up in hateful violent environments who was taught that to kick some idiot ass if anybody messes with them.  they might slip up and attack a child who is already fragile and injure them in any of a myriad of ways, unfolding an onslaught of charges against your child and you, that will force you to reconsider the error of your ways.

these boys will face any of a series of possible punishments when they return to school in january... the school has a no tolerance policy and have expelled kids for being in a group observing one from the group attacking a victim... and on their record (the kids in the group... spectators who were with the attacker) goes a charge of gang violence because of the group intimidation element.

so, woe to those parents... and if you're not sure if your children are happy, well adjusted, self-respecting and respectful of others, then maybe you need to get to know your children better, or woe to you as well....
Posted by Brig Feltus at 12/22/2009 12:32:00 PM