This meal was so good, we had it two nights in a row!!!  Fresh fixin's cooked right at the table, just like in your favorite Korean BBQ restaurant!!!  You can do this with or without meat, and almost all of the other players in this symphony of flavor are readily available in any grocery store.

So, this week has not gone as planned.  First of all, let me apologize for the badly lit photos, not only did we have a short in the light fixture over the kitchen table, but my camera was trippin' as well....
I may have bit off more than I could chew thinking I'd cover more than one asian culture's cuisine.  I was ambitiously planning a Chinese, a Japanese, and an Indian dish as well this week, but, that was a ridiculous notion!  So far, we covered the Korean Hot Pot (go here to see that recipe).  That was fun, and tasty.  I bought the smallest tub of Gochujang I could find.  That tub of Gochujang, however, would last me a year, if I don't use it, and for sure I knew I wanted  to do some Korean BBQ because it's one of my faves... I love to eat at places where you the food is cooked right on your table.   Korean BBQ steps it up a notch, with it's sweet, spicy, smokey flavors.  Everything tastes fresher than fresh.  Quick cooked to seal in the nutrients.  Fresh food just tastes different.  The molecules have not been completely destroyed.  The textures are more vivid.   So I recommend this sincerely!

There are two things you will need.  One is a table-top gas burner.  I bought ours at the asian grocer for about $19. 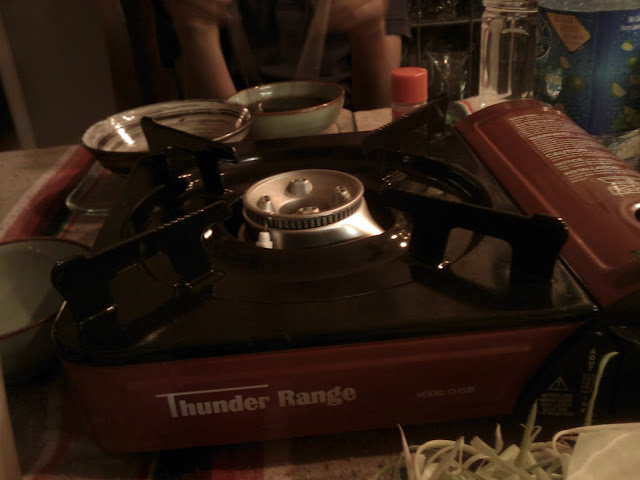 You can use it for doing a more traditional Hot Pot at the table, Shabu Shabu , Fajitas, and many other table prepared foods you'll find in many different cultures.  They use gas canisters the size of a spray paint can, and these are easy to load and replace.  I bought a pack of 3 canisters for about $8.  Between the Hot Pot, and two nights of Korean BBQ, we finished off one can of gas.

You'll also need a grill for this dish.  A traditional Korean grill will be round and has a stone center, and will fit neatly over your burner.  We purchased a rectangular grill top. 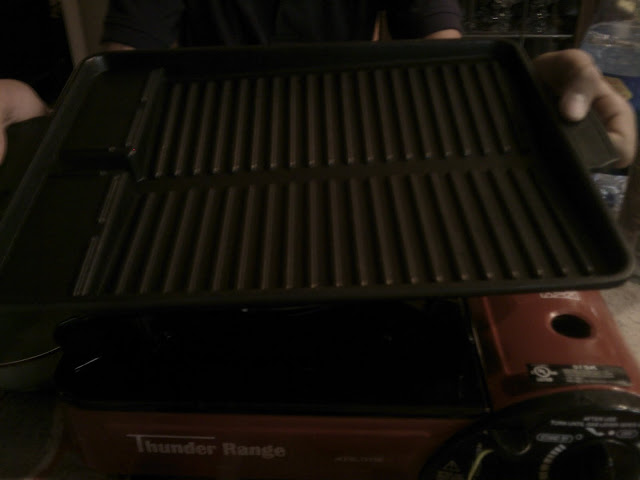 It has a larger surface area so we could cook more.  But in retrospect it probably would have been better to use the traditional one because the marinades and sauces used in Korean BBQ are sweet and will easily burn if they have nowhere to go.  The traditional Korean BBQ grill has a resevoir underneath to catch juices where they can't burn instead of them collecting on the hot grill and charring.

If you've already got a George Forman grill or something similar to that, it will work.  But you still wanna be able to use it at the table and there needs to be enough surface area to cook meats and vegetables simultaneously.  These Korean grill tops run about $10-15 depending on where you look for them.  Asian grocery is the best place to look.

I also had to adjust on the second night what grain we used.  The first night we used brown rice.  It wasn't sticky enough to take the sauce and be picked up with bbq via chopstick.  So the second night, I used a Japanese Sweet Rice which is highly glutinous (meaning sticky like glue...not high in gluten).  YUMMY.

Most of your prep time will be spent cutting up veggies, which shouldn't take more than half an hour, and then the food is actually cooked at the table where everyone sort of participates in adding, turning, removing, dipping, and gobbling it all up.

You'll want to set your table up prior to anything else so it's out of the way.  Each place setting will need a plate, with two smallish bowls. 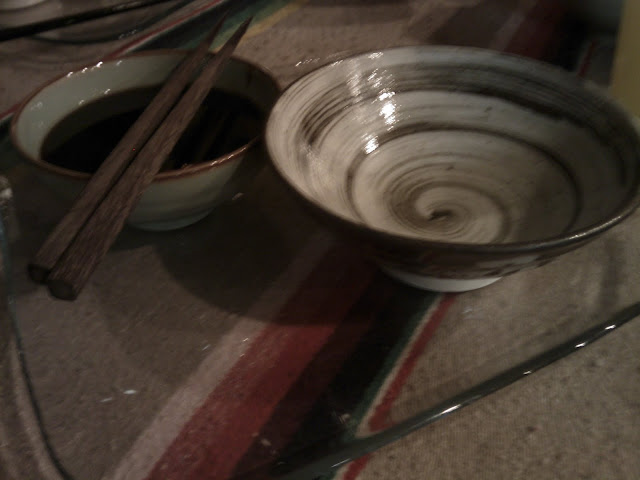 One bowl will be for each person's portion of rice, the other will be for their sauce.  You'll also want to have some Gochujang at the table so that folks can mix in extra spice into their sauce. 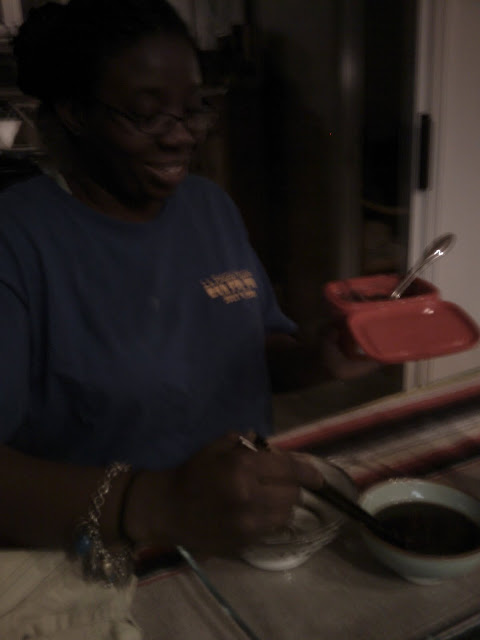 Japanese Sweet Rice  (get this in any asian grocery store, and in some normal supermarkets in the asian foods section where the rice is shelved.)  Mirin Style Sweet Cooking Rice Wine (This is not Korean.  But I added it to the marinade anyway because it tastes good.  It's basically a cooking sake... basically... Just look in your asian grocer for this in the same aisle where the soy sauces and marinades are... Just get the one attached in the link above.  Make it easy on yerself!)  Soy Sauce  (Child, if you can't find a bottle of soy sauce.... you got issues... any store, probably even your neighborhood quicky mart has soy sauce...)  Garlic  (fresh by the head....)  Fresh Ginger (Get a decent sized root section from the produce section in the grocery store.  It should be firm and not easily bent in your hands.  If it's floppy, it's old and its flavor will be flat. Save the leftovers to make tea!  Fresh Whole Black Peppercorns (you'll be crushing these yourself, preferably with a mortar and pestle, however, if you don't have one, a grinder works well, and as a last resort you and smash them with the backside of a spoon.) Light Brown Sugar (Find organic brown sugar, instead of the typical brown sugar you find everywhere, because it's just white sugar with molasses added... organic sugar is brown because of its natural molasses content.  why buy sugar that's been processed to remove that, then artificially replace it.  that's silly to me, and even though I don't have the science to back me up, sounds like there has to be something wrong with that picture...) Veggies (Bok Choy, Broccoli, Soy Bean Sprouts, Zucchini, Green Onions, Red Bell Peppers)  Proteins (In asian grocers they will have thinly sliced meats and fresh tofu: Take your pick:  Firm Tofu, Thinly Sliced Chicken Breasts,  Shrimp, Thinly Sliced Beef,, Korean BBQ Style Sliced Beef Ribs).  Sesame Oil

PREPARATON:
Make your Sweet Soy Base Sauce (Jomi Ganjang) the day before.
In a medium saucepan combine:
1/2 Cup water, 4 large cloves garlic, thinly sliced, 6 slices peeled fresh ginger
Bring to a boil, then lower the heat and simmer for 10 minutes.
Add:
1 cup of soy sauce... low sodium please, 1/2 cup light brown sugar, and 1/4 cup of Mirin Style Sweet Cooking Rice Wine (can be substituted with a cold sake, or a sweet white wine like zinfandel)
Turn the heat to high and boil for 2 minutes.
Remove from heat and let cool to room temperature.
Strain the sauce through a sieve, into a container that has an airtight lid.
Store in the fridge for up to 3 months.

Two hours before dinner time, marinade your meat in 1/2 cup of your soy base sauce.
(we did both beef and chicken) 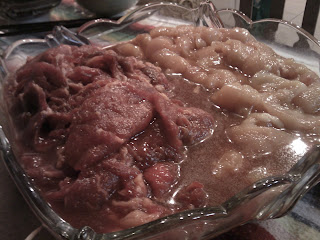 Cook your rice in a rice cooker according to the instructions on the package, allowing plenty of rice, because it will go very fast...

Set your table.  Place the stove and grill in the middle of the table. 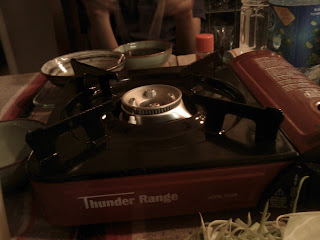 Divide remaining sauce between the sauce bowls at each place setting. 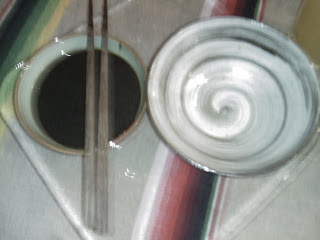 Cut up your veggies into 3 inch long julienne sticks, arrange them on a platter. 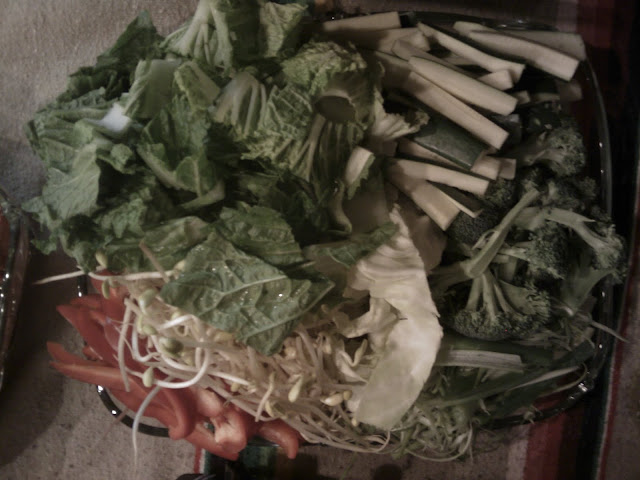 Slice your broccoli on the thin side, so that it has flat surfaces to cook on the the grill.

Turn the table top stove fire on, and place the grill over it.  If you're using the round Korean grill make sure to add water in the reservoir so that drippings won't stick and burn.
While the grill heats up, call everyone to dinner.
Invite them to add a bit of Gochujang to their sauce for extra spice.

Add a couple of tablespoons of sesame oil to the grill surface, then add some of your items that take longer to cook... a few broccoli slices, peppers, some chicken breast 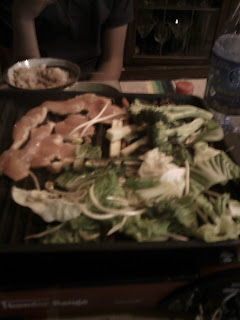 Stagger adding ingredients so something is always cooking and something is always ready to eat.
Chicken takes longer than beef.
The first round will seem like it's taking forever...
Talk among yourselves, and just be patient. That's part of the charm... it forces you to commune with your people in a way you might not in your everyday dining.

Be sure not to eat everything that's ready and forget to put more on.  As soon as there's an empty area, add more veggies, meats, tofu, etc...

One person can be in charge of that if you like.

People can use their chopsticks to take food from the grill, dip it in their sauce bowl, then place it on their rice bowl.
Delish-Delish!!!


Afternote: If you have leftovers, put them away and stirfry everything that was left together in a wok the next day, drizzle with a bit of your soy base sauce,  and serve over ramen noodles.