Derek Sivers Doesn't Know It But....

... he's one of my secret mentors.  I have a few.  But this founder of the website CD Baby is someone I've been following since he sold his company and set out on a journey of new awakening.
What's so special about Derek Sivers? 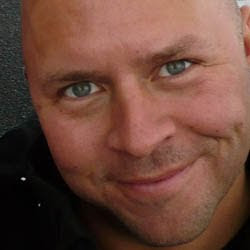 I have my music on the CD Baby site.  They sell downloads and actual physical CD's, and they are responsible for my music being on every major form of online distribution... including iTunes long before there were any other ways to get onto iTunes as an independant artist.
When someone buys an artist's cd from their website, they keep track of all your stats, and I don't know... once a week, I think it is, you get an email letting you know how many cd's you sold and how much money you made.
At the end of that short and simple report, there was always this message from Derek saying:


Yeah, I know that went to every cd baby artist.  Did that make me feel any less warm and fuzzy?  No.  He made sure his name followed it.  As broad sweeping as that little message may have been distributed, he put his name on it.  That meant something to me.  It said that if I ever ran into him, and asked him to recite those lines, he probably could, because he wrote them himself as his personal sign-off on every business transaction. That notion made me feel somehow protected.  Like Derek Sivers and his company had my back. He put his name on it.  What a genius bit of psychological marketing!

When he left, I was very skeptical about what would come of my relationship with that company.  But so far, nothing has changed... it's as if in his leaving he required certain things to be kept intact when he was gone.
The message at the end of the sales report is still there.
Humorously, it now is signed The Money Person.

What is he doing now?  Well... lol... Mr. Sivers has a blog.  That's right.  He left his highly profitable business behind and for the last couple of years, has been writing a blog.  I've been reading it for the last year.  When I first started reading it, I did so reluctantly... I didn't want to go on.  I didn't want to hear the same old stuff that all the industry gurus try to spew.  Most advice out there fits comfortably into the category of Status Quo.

I was so tired of the same old crap being repackaged and perpetrated as a new idea.  I didn't need that.  I needed to learn something new.  The music industry is falling apart because of its stoic exploitive nature.  It disgusts me and often makes it very difficult to function on a business level.  A little more than a year ago, I had a manager, who was also a long time friend of the family whose advice and direction lost me enormous amounts of money and the ability to promote my debut album.  I was devastated and years worth of jade came down on me in the course of that one moment in time.  I have little or no tolerance anymore for wasting time, money, or heart on the words of people whose actions don't match.

Derek Sivers' blog has kept me from going completely cold on this journey.  Everytime I'd think I was going to toss it aside, another blog  update would show in my email inbox and I'd read what he had to say and heal a little.  I can't even tell you how many times I felt like he was writing to me personally.  I could relate so well to his journey.

Lately he'd been writing alot about being idle, the concept of being completely free, not having any place he had to be, nothing he had to do, no obligations, and no schedule.  One blog he wrote about just doing nothing... that day he was just going to sit around and read and sleep and then read and sleep some more, because the book he was reading was inspiring.   I thought to myself, "yeah, right... what are you reading, Mr. Sivers??"  I tried to post that question as a comment and for some reason it wouldn't take my post.  So I went to the email update I'd received and did something I never do.  I reached out to a total stranger, who, in my estimation is in a whole other league than I.   Short and sweet, I wrote, and asked him what he was reading.
He wrote me back within 24 hours.  I was a bit floored by his accessibility.  Here's what he wrote...

Hi Brig -
Awww thanks! :-)   Heheh, I was reading a programing book actually.  Not that interesting.
I just get excited about that kind of stuff.
Thanks again!
I'm so glad you're liking the blogs!  Very cool!
More to come!  :-)

I knew he had something up his sleeve.  Who reads programming books for nothing in their leisure time? Something new is in the works.   I am pretty excited to find out what it is...

Recently the TED organization commissioned him to speak at their Talk in India.  This organization excites me too and you should check them out.  (Which reminds me, I plan to join them to stay in the loop.)   Anyone interested in technology, entertainment, and design should be hip to TED and its adventurous conferences.

I feel like I'm wasting time writing all of this gushy stuff, when all I need to do is give you the darn link.  His writing is inspirational.  It's not just about music and the sale of it.  It's about living life to the fullest, how to find your niche in the world, being a maverick, getting up off your duff and making things happen instead of waiting for them to happen, or in the adverse, stopping full halt and contemplating what the hell you're doing...  It's a good blog and his insights are very honest and to the point.

The blog update I received today, led me to his blog page to read an entry that moved me more than any blog he's written in the past.  I would love for you to read these words and be enriched by the poignant wisdom in them.
I have to run...
We are on our way to the California Science Center to take part in a conference about the human genome and the medicalization of race.  Yeah.   I am the mother of a budding scientist... That's how we roll... :)