Let me preface anything I compose here with the following statement, I am not 100% myself today.  The Brig you all know is missing at least half of her energy.  I may ramble more than usual.  (you know I know how to ramble...)  It was a fantastic weekend.  Lots of consciousness altering spaces, and I'm not talking about the pharmaceutical sort.

One of the spaces I found myself in was a room of a couple hundred really smart people gathered for a conference to discuss the advancements made by the Human Genome Project that will effect something called the Medicalization of Race.  I took the Austrian and the Pyrate to this and it was an experience that for sure has imprinted some new data upon each of our individual consciences.   More about that another time.  I want to do a little research so I know a little better what I'm talking about.

My sister was also in town from Friday til Sunday night.  She lives in D.C. so we don't get to see each other much these days.  To have her home for a couple of days was definitely a treat. 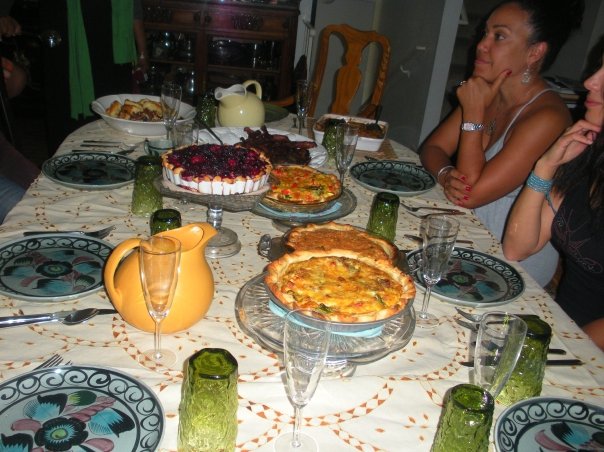 Potato Leek Gratin, Farmer's Market Quiche, Almondberry Tarte, Nectarine/Plum Pound Cake, Herb Infused Breakfast Meats.  Served on vintage, hand-painted, artistan signed plates from the Tonalo region of Mexico, 1940' s green Seneca Driftwood glasses, vintage Coorsite ball pitchers, crystal cake pedestals all from my collection.  All vintage wares come from my spelunking on ebay and in flea markets for a fraction of their worth. Shall I blog about my spelunking???(Ikea flutes bought on sale for less than $1 each... I have about 50 stored away for parties.)

On Sunday I invited some of  my sister's  best girlfriends (who have treated me just as much like a sister, as they treat my sister) over to my house for brunch.

The Austrian and I got up early for our Sunday morning trip to the farmers market.   I know I'm repeating myself but every single time we go there, my love of the experience is validated.  The perfume of the fresh cut herbs, the resplendant hues of sun-ripened fruits and vegetables.  Shaking the hand of the farmer who grew that bounty of color and flavor.  Having them look me in the eye and proclaim their goods are hormone, pesticide, herbicide, and wax free!   I enjoy that place so much.

This week I went looking for a farmer who always has delicious Italian sweet peppers in every color and size.  There were none.  They are out of season.  Something you will seldom hear in a supermarket in America.  Mass producing farms will produce almost anything year round and do all kinds of obscene things to force grow foods that should not in a natural world be growing during certain times of the year, or you'll find little stickers on the food that says it came from half way around the world, picked long before the sun was finished doing its work, coated for travel with waxy protective mediums that do not digest well in the human body.

Anyway, there were no Italian sweet peppers, I let out a disappointed moan, then let it go and snooped around his long tables full of other earthly treasures.   I came upon some cool stuff I'd never seen before such as Chinese Sweet Pea Greens... something you will probably NEVER see in a grocery store.  In fact the farmer selling them claimed he is the only one selling them in California, and will only have them for about a month.  As I was asking the farmer about their flavor and use, a little old Chinese woman leaned towards me, with her giant sunglasses and her visor cap, and kindly gave me a couple of easy recipes that she uses to cook them and told me about the regions of China where they are typically found in the cuisine.  Pea Greens are used in the same way other greens like kale or spinach are used.   Usually cooked quickly, and can be exchanged in recipes that call for any other greens.

The farmer gave me a leaf to taste. (because the crops are chemical free, that's something you can do... ) The little old lady beamed in anticipation of my reaction and when I expressed approval of the flavor, she clapped happily and patted me on the back and told me to take some home before they are gone!  Call me corny, but I love that.  It's not just about eating it's about feeling.  I bought two bunches and used them to make a quiche that was met with ooh's and aah's and moans of gastronomic pleasure... beneath it all, boosting the health of those consuming it without them having to think about it...without them having to comprimise pleasure.

I love that experience of absorption that happens so often at the farmer's market... where people are not only friendly, but happy to share, to help each other broaden their horizons.  Imagine that.  Broadening your horizons by simplifying the one thing you definitely do everyday without fail, if you are able.  You eat.  It's about narrowing the distance between the earth your food was produced in and your mouth, while simultaneously spreading your mind wide open so that you might find new dynamic ways of thinking about the pleasure of eating  and food's  influence over your health and nutrition.
Some think that affluence is about being able to buy expensive cuts of meat in the grocer, and shopping at stores like Whole Foods and Gelson's.  It's not necessarily about how much you eat.  It's not even about being able to eat out at restaurants more.   However most affluent people I know, in fact, most non-American people I know would very much rather shop at a farmer's market, get high quality super-fresh food and learn how to prepare a meal fit for a king!

In addition to the Sweet Pea Greens, I got Red Potatoes, Red and Yellow Peppers, Eggs from a chicken farmer, Canadian Bacon from the German style Sausage peddler, 3 kinds of berries from the berry farmer, almond paste from the almond grower, dried unsulfured nectarines and tangerines, and pluot jam!  mmm. mmm. MMM. 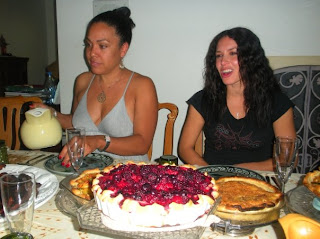 Sunday brunch was almost exclusively brought to you and my house guests by way of the Santa Clarita Farmer's Market.  Below you'll find the first of five recipes.  The rest of the recipes will have their own post.  They'll be up today, I promise... Be patient!

Prepare this feast for your family or friends, and they will recognize the hidden ingredient is LOVE.
POTATO LEEK GRATIN A LA BRIG 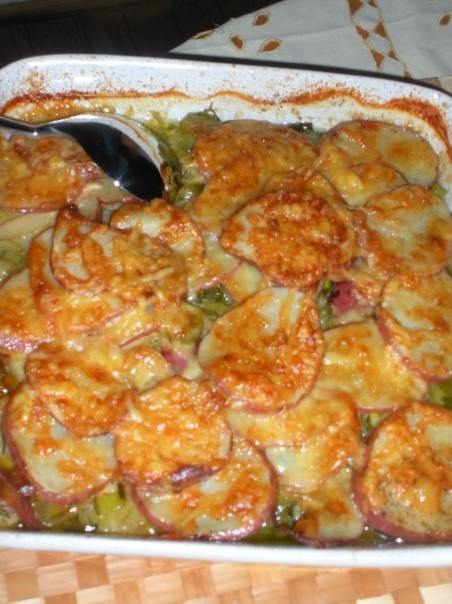 This is so easy and so undeniably delicious, you will want to eat the entire thing yourself.  But don't.  Save room for a little of everything from this delicious spread!  I should have said this to my brunch guests because they really did go through this dish like nobody's business!
This takes about 10 minutes to put together and about 30 minutes in the oven.  That's it.

THE PLAYERS  (your grocery list)
8 Large Red Potatoes  (where to find them??? anywhere!  but you know what I'm going to say here: FARMER'S MARKET-FARMER'S MARKET!!!) Extra Virgin Olive Oil (first press) 1 Leek (these cousins to the onion can be found everywhere produce is sold, be sure to separate and wash the layers well because they usually hold a lot of mud and dirt for the earth they have been plucked from) Fresh Herbs (this is flexible, but we used rosemary and oregano, you can also use dill, thyme, tarragon or most other herbs in whatever combination you like. you'll need about 1/4 cup chopped of each of two varieties or 1/2 cup total combined herbs)

Gruyere Cheese (this is a Swiss cheese that goes unbelievably well with potatoes and eggs.  remember that for your mental flavor pallete.  find it in any fine deli section where imported cheeses are sold.) Broth  (We used chicken broth, but you can use vegetable broth and it will be be very good as well, but be sure that either way you get organic and low sodium broth or stock)


PREPARATION:
Preheat oven to 425 degrees
Slice your potatoes in 1/8th inch slices and set aside.
Peel back the green stalks on the leek to reveal the muddy sediment and wash your leek well and remove roots from end, and cut off wilted green ends of the stalk.
Slice your leek into thin slices, the entire thing and set aside.
Grate your Gruyer.  You'll need about 10 ounces (about 1 1/2 cup shredded) of cheese.
Drizzle a bit of olive oil into the bottom of a square ceramic baking dish.
Layer potatoes in the bottom of the dish.
Sprinkle about 1/4 of the cheese over the potatoes.
Add your sliced leek in a layer.

Add another layer of potatoes.
Add another 1/4 of the cheese.
Now add all of the chopped herbs.
Add a final layer of remaining potatoes.
Drizzle with olive oil.
Grind some fresh black pepper over the top.
Pour just enough broth over the entire surface so the cheese is moistened, and so that the broth almost comes up to the top layer of potatoes.
Put this in the oven to bake for 30 minutes and then check.
The surface should be golden and bubbly, and the potatoes should be tender when you pierce them with a fork.  If they need a little longer don't fret, leave them in and check again in 5 minutes.