Love Is Fragile For a 12 Year Old Pyrate 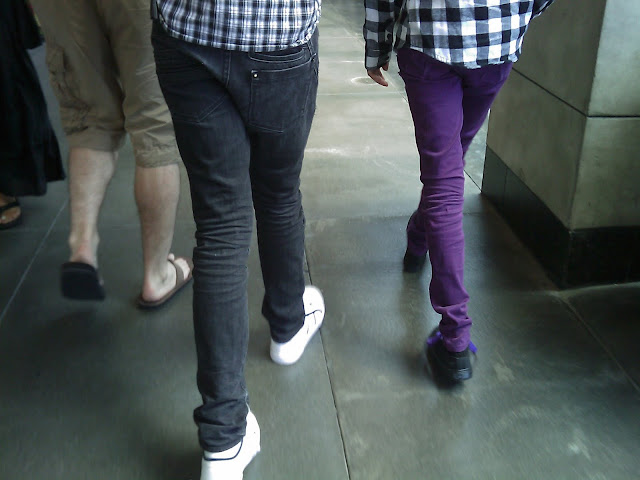 Faces have been concealed to protect the skinny jeans...and the innocent.

It was his first love.  They met in the 6th grade... a place where no child feels sure of  him/her self.  A sea of preteen turmoil, hormones, insecurity, and the looming launch into the pre-adult years.

He was a good kid... a smart kid.  She... a smart kid too.  They both liked skinny jeans.  She had beautiful big brown eyes.... and they had that underlying nerd syndrome in common.

It was a rainy day when he called me just before the last bell rang, and he asked if one of his friends could come over and work on an animation project together with him because we have a wacom tablet.   I said that would be fine and that I was on my way to pick him and his friend up, and that they should be in the designated rendezvous location in the next 3 minutes.

When I arrived, there was no one in the designated rendezvous location.   My eyes scanned the lawn... full of angst filled preteens.   Through the chaos I saw him walking my way... carrying two backpacks instead of one... and to his left, walking alongside him, was his friend.  She had long, dark brown hair, with bleached tips, black skinny jeans, and the biggest eyes I ever saw on a child.  For a moment, it didn't register.  I looked away.   Two seconds past and I felt goosebumps began to raise on my arms as the realization that the "friend" he was referring to was this waif-ish young lady walking towards my car... hair blowing in the wind, eyelashes fluttering, bashfully uncomfortable half-smile on her lips.   I kept my composure even though I was thinking to myself, "Oh shhhhnaps! Here we go...", and the next thing I knew, the two of them were climbing into the back seat of the car and he was introducing his "friend".

But as soon as we got home I pulled a move you only see on television.  I excused myself and asked the Pyrate to come with me into the other room for a moment...

"I thought you said your friend..."

"That is no friend. You expect me to believe you don't like her???"

"But you can't tell me you don't like her as something other than a friend. I can tell by the look on your face, and that stiff neck posture... and you were carrying her backpack!"

(I was trying my very best to seem cool and hide the humorous adrenaline that was pumping through me...)

"Okay, okay, maybe I like her a little bit.  But she has a boyfriend"

"Well we'll talk about this later."

That was 8 months ago.  The next week, she and her so called "boyfriend" (whom she only saw at school) broke up, and the Pyrate announced to me that he would ask her to "go out".   To pre-teens, "going out" is what you call "going steady", even though they aren't actually going anywhere!  I asked him...

"Did you ever see her kiss him?"

"How about hold hands."

"Do they actually go anywhere?"

(He rolls his eyes and gives me a rather condescending look.)

"NO mom! It's just a figure of speech. They don't go anywhere."

"Mommm, stop being weird!  Why do you have to be so weird??"

"It's not that serious mom."

"That depends... I mean... there's no kissing, or making out behind buildings, right?"

"I'm just  making sure because, you are definitely too young for that kind of stuff.  So what exactly does it mean, son, to be going out with a girl. Is it a matter of virtual posession?"

(He pauses, looks up into the corner of the ceiling for an answer... then, with an awkward expression...)

That conversation went on for a good 45 minutes, we talked about the girl's family, and whether or not they would be fine with it.  Turns out that the parents didn't know about the last boyfriend.  FAIL.

"Um... I know you don't think I'm gonna let you go out with a girl and her parents don't know."

"All relationships of any sort, should be built upon honesty and openness.  Sneaking around and doing stuff behind her parents back is not okay.  You will not be a part of that.  So  she will have to talk to her mom, and you will have to ask her mother's permission, or I will talk to her mother about it for you.  Otherwise, you will be forbidden to go out.  Furthermore, I'm not at all impressed that she has already been sneaking around at 12, with a boyfriend behind her parents back.  If her parents were to find out while you're going out, they would no doubt immediately ban her from even speaking to you anymore... especially considering her father is a very devout muslim.  Nope.  All must be above board, on the table, full disclosure, just like we do here at home.  That way your friendship with this girl is protected."

"Do you want me to call her mom?  I still have her number from when she picked her up from our house that one time."

We had a refresher course to go over the birds and the bees. (A conversation we'd had already when he was 7 years old, because he is a scientist and already knew a lot from his avid study of the animal kingdom.)  Then a few days later, an addendum to the birds and the bees that included online photos of genitalia inflicted with venereal diseases.   We talked a bit about the psychological effects that growing up without a father in the home has on girls, and their interaction with boys.  We talked about hormonal excess.  We talked about masturbation.  And when I was sure we had a clear and open line of communication, and that this was just some innocent sort of "first love" kind of thing, I let it be.

That was 8 months ago.

Last night, at the dinner table, (gotta love dinnertime conversations in our house), I found out from him that they broke up.

(He rolls his eyes.)

"Stop talking to me in internet abbreviations, son.  What happened? Tell me!"

"Stop that!  What happened?"

"We were hanging out at lunch with friends and she and her friends kept messing with me... pushing me off the table, and stuff.  I got really annoyed and said if she didn't stop I was going to go sit at the other table with my friends."

(I was grinning inside at the preposterous nature of this account, and I do not openly express my relief and pleasure to hear the news...)

"Anyway, they wouldn't stop so I got up and went to the other table.  She totally freaked out on me and told me that she was sick of me being so stubborn and bossy."

(I sat there puzzled.)

"But this happened a week ago and you haven't shown any signs of being upset or anything."

"No, listen, I'm just trying to get to the bottom of the situation and find out where your head is at, because one minute you're all angst-ridden because you luvvv her so much.  The next you've just broken up.  Over nothing in particular, and that's that?  And you're not even upset about it?  How is that possible?"

"Is there more to this than you're telling?"

"She's a pain in the butt mom.  She insists that I sit next to her EVERY day at lunch and nutrition break and sometimes I want to hang with my friends instead of sitting there with her and her girlfriends. But she would throw a fit if I even suggest it.  She was very clingy and controlling.  Even her friends who still talk to me, say they agree that she's very bossy and controlling."

"But you never complained about any of that when I'd ask you for updates..."

"And I'm still a little perplexed about the whole 'love her forever... til I die' thing one day and 'it's over and i'm not upset about it' the next.  She's not upset?  You're not upset? This doesn't seem normal."

(He looks at me impatiently with a disapproving scowl on his face.)

Well.  That was the end of that.  He had a point.  The conversation went on from there without much words from me.  The Austrian talked about his preteen years and the girls who dumped him and how the only person he could talk to about such things was his grandmother... who gave him this sage advice:

"There are other mothers with other daughters, Andreas.  Don't you worry."

Now... he seems fine.  Me?  I don't know whether to relax or feel even more concerned because now he's a 'free agent' again in that big stewing brew of hormonal angst, curiosity, and insecurity...

This part of motherhood?  This is the fun stuff right?