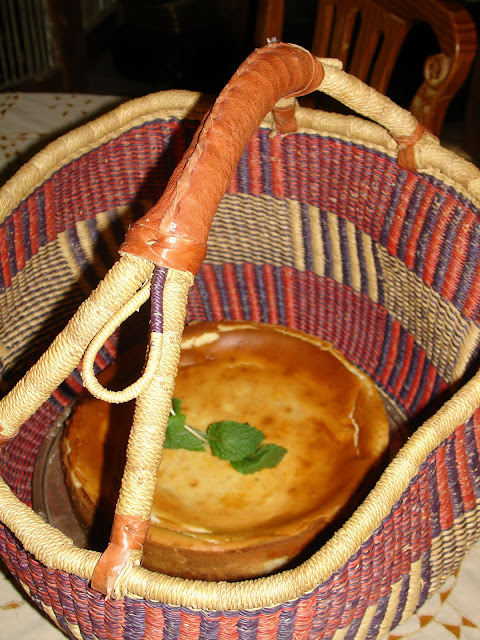 Sweet Potato Kahlua Swirl Cheesecake, all packed up and ready to go to

Yes, there are quite a few pictures in this posting.  I couldn't help it.  I needed you to see this one from every angle, to see the surface, the sides, the crust up close, the interior goodness.   I don't know about you, but as far as I'm concerned these photos say more than I ever could...

I don't make this more than once or twice a year, for a special occasion... usually at Christmas or New Years, or, as is the case this time, for Thanksgiving Dinner.  Many years ago I used to make a cheesecake with pumpkin and kahlua.  This is a much different taste.  The squash-like flavor of pumpkin is not anywhere near as sweet or rich as sweet potato.  I played around with it until the sweetness and moisture balance was right and the following recipe is the result. 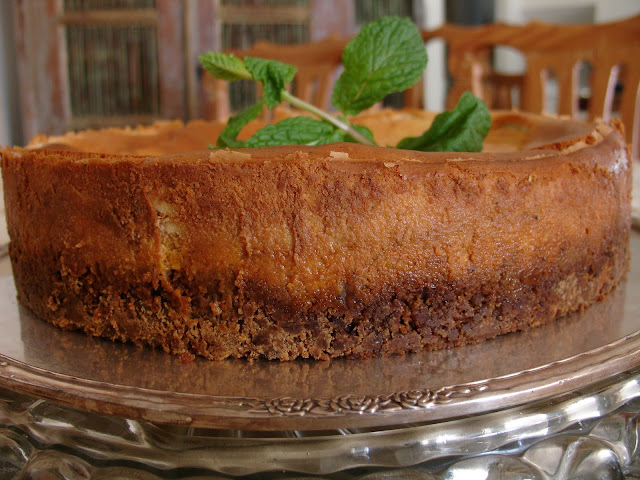 When it was time to serve up desserts, and our family partook in the first mouthful of this creamy rich pleasure, eyes closed, moans escaped, my name was called out.  It was good for me.   Ha!  I love a successful experiment.   The wedges of this cheesecake went so fast that I didn't get any.  I was happy that I'd made two.... 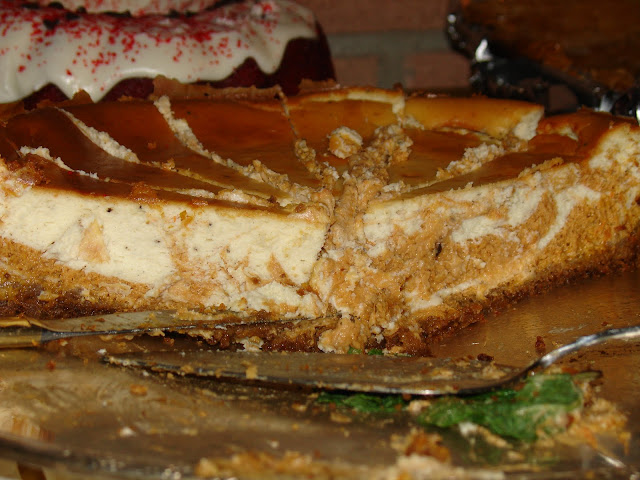 ...and that at the last minute, I'd decided to leave one at home.  Three days have past, and everyone who's passed through our doors has had a taste... and for now, this decadent treat, with its coffee liqueur infused swirls of cream cheese, the natural sweetness of sweet potato and vanilla, and its graham cracker-gingersnap cookie crust,  is all  but a memory.  You'll find this to be surprisingly not cloyingly sweet because the potatoes are allowed to carry that part of the flavor profile, with just enough sugar added to balance the chemistry. 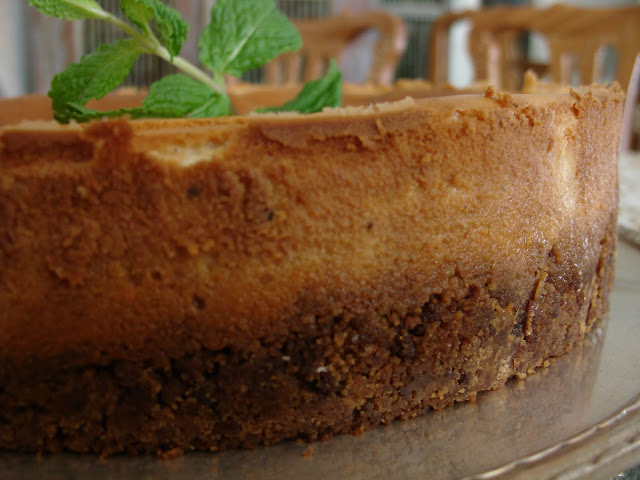 There are two very basic things you'll need to know about making cheesecake.  You need a bain marie, and a 9 inch spring form pan.   A bain-marie is a french technique that loosely translates to mean a water bath.  Sometimes it's used to melt chocolate by setting the bowl of chocolate over a pot of hot water.  The other use, which you'll be doing here, is to place a pan of water on a rack in your oven below the rack your cheesecake will cook on.  The purpose of this is to maintain a moist environment in the oven so that the surface of your cheesecake will not dry out so much that it cracks.  Now, this is not a huge tragedy.  It will still taste the same if it cracks... well.... it might actually have a slightly less tender surface... but it will not ruin the cheesecake except for the esthetics, which in this case, I must say, is something worth preserving.  The cheesecake I decided to keep at home, was the first one I did, and I forgot to use a bain-marie, and there was an enormous crevice across the middle of it when I pulled it from the oven.  Again, not a tragedy, but not perfect.  The second cheesecake, as you can see had a much better appearance because I added the bain-marie to the oven.

A springform pan is a pan made especially for baking cheesecakes and other types of breads and baked goods that are deep  and would be difficult to remove from the pan if the sides were not removeable.  A spring form pan has a base, and a removeable ring that clamps shut onto the base, then when your cake is done and you are ready to remove your cake, you simply release the clamp and voila!  The one I have is made by a german company called Oetker.   Amazon.com has one you can purchase here:

Mashed Sweet Potatoes (Don't confuse these with yams. They have purplish burgundy skins and orange insides.  Anything else is NOT a sweet potato.  You'll need 2 cups of mashed sweet potatoes.  I don't list a number of these because it depends on how big your potatoes are.  Err on the side of having too much and save the extra to make sweet potato pancakes the next morning...Peel and cut them into large cubes to cook them faster in boiling water, then drain and mash and allow to cool completely before using.) Cream Cheese (For quicker preparation, get the whipped/spreadable cream cheese in tubs.  You'll need 24 ounces for one cheesecake) Graham Crackers (Find these in the cookie and cracker aisle.  You'll not use the entire box.  You'll need enough to make 1 cup  of  crumbs in a food processor.  Save the leftovers for s'mores..) Gingersnaps (Also in the cookie and cracker aisle.  You can find these in just about every American grocery store.  You can substitute another brand or similar ginger flavored crunchy cookie. You'll need enough to make 1 cup of  crumbs in a food processor.) Unsalted Butter (you'll need 1/4 cup for this recipe) Powdered Sugar (I try to make it a habit to buy organic, whenever possible but if you can't find it, conventional powdered or confectioner's sugar will do just fine for this purpose.  You'll need 1/4 cup for this recipe) Eggs (You'll need 6 eggs, go for organic and farm fresh if you can...) Vanilla Bean (You'll be using the inside of a vanilla bean in this recipe.  If you can't get one, then use 1 tablespoon of vanilla extract.   But I highly recommend using the bean...) Demerara Sugar (...or Turbinado Sugar... either will work.  You need 1 1/4 cup for this recipe. Regular granulated will work...) Ground Cinnamon, Ground Ginger, Whole Nutmeg (I buy this whole because it keeps its flavor better that way. You simply use a rasp to grate off as much as you'll need... 1/2 teaspoon for this recipe.) Kahlua Liqueur (Find this in any liqueur store or grocery with a liqueur department.  It's great for cold weather drinks by the fire.  A little in your coffee will warm things right up!  You'll need 1/2 cup for this recipe)

Cut your potatoes into large cubes, place in a large pot, add enough water to cover, boil rapidly until cubes are tender to the fork.  Drain, mash, and set aside to cool.


In the large bowl of a food processor, add equal amounts of gingersnaps and graham crackers and pulverize until a grainy meal is formed.  There should be no large chunks. Make sure you have 2 cups of crumbs.

Press this crumb, powdered sugar and butter mixture into the bottom of your springform pan, making sure to cover the entire bottom of pan, and pressing up the sides a bit.

Gently put this crumb crust into the oven to bake for 5 minutes then remove and cool.

While this is cooling make your filling.

Whip your cream cheese in a mixing bowl with an electric mixer until fluffy.

Add sugar and mix til combined.

Scrape the inside of your vanilla bean into the bowl and mix until combined.

Add eggs, one at a time with mixer going on medium speed.  Stopping to scrape down the sides of the mixing bowl with a spatula in between each egg.

Once all the eggs are combined with the cream cheese, transfer 1/2 of this mixture into a separate bowl and put aside.

Add 2 cups of mashed sweet potatoes, 1/2 cup of Kahlua liqueur, 1 teaspoon of cinnamon, 1/2 teaspoon of ground ginger, and 1/4 teaspoon of fresh grated nutmeg to the remaining half of your cream cheese egg mixture.

You should now have a cream cheese filling and a sweet potato filling in two separate bowls.

You will now pour 1/2 of your cream cheese filling into the bottom of your crust in the spring form pan.

Then pour 1/2 of your sweet potato filling on top of that and spread around gently so as not to disturb the previous layer.

Then pour the other 1/2 of the cream cheese filling in and spread around gently.

Then the final layer of sweet potato filling goes in last.

With a butter knife, gently drag through and lift, swirl and pull through the filling  to create a swirl pattern, being careful not to disturb the crust.

Place a pan of water on the lowest rack in your oven.

Place your cheesecake in the oven and bake, undisturbed for 45 minutes.

Turn off oven and open door just a crack.

Leave cheesecake in oven to cool for at least one hour before disturbing.

After one hour, remove from oven and transfer to refrigerator to chill completely.

When ready to serve, gently slide a butter knife between the cheesecake and the inside of your springform pan to separate it.

Then unlatch the clamp of the springform pan.

With a firm metal pancake turner or spatula, go along to bottom of the cheesecake to gently release it from the base of the pan, then carefully slide the cheesecake onto a plate, platter, cake pedestal, etc... 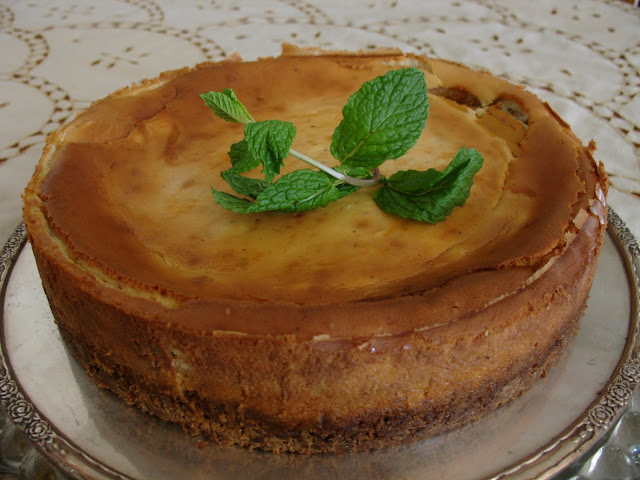