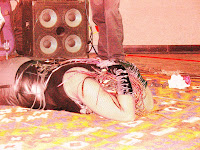 I had a blog going pretty well up until about a year and a half ago, when I went into somewhat of a period of seclusion.  People are wondering what happened to me.  People are unhappy because I don't return phonecalls.  I'm still getting used to answering the phone again.  Why?  I don't really know.  Perhaps it was the pneumonia I caught in July '08 that would not leave me alone for almost 6 months.  Perhaps it was the traumatic discovery at the beginning of '08,  that my then manager had single-handedly brought my ability to promote my debut cd to a screeching halt just as it was taking off.   Perhaps it was the looming decision about whether or not the Austrian and I could focus on our relationship long enough to decide if we should make a larger commitment to each other.   Perhaps I needed to "go within" and do some soul managing.

Well... if you know me well, then you know that it was probably all of the above.

Near the end of the year the Austrian and I decided that we would go ahead and do this marriage thing.  We chose the date, July 25, 2009.  I planned the whole thing by myself with the help of my dear friend Stacey Scantlebury.  That was... a hoot, to say the least.  I would have to write about 5 blogs about that day and all the planning that went into it.  I spent about 5 months  just making  crepe paper flowers.

The day of, there was so much to get done in preparation, we were 3 hours late with the ceremony!

Suffice to say, we did it.  It was fantastic.


Afterward, we took a trip to the Yucatan Peninsula.  Fun times!!!

Here I am now, it's November.  It's been 3 months since the wedding and I am just now starting to get my life back to normal.  This impending normalcy got me started to thinking about what will be next, because, as I've already stated, stagnation does not agree with my disposition at all.   Music will be created.   In fact, just last night, I was discussing that with Chico, my partner in crime.  We will be writing again very soon.  The blog is being completely re-vamped into something more than a medium to promote the music.

I've been rolling the idea around in my head for a few weeks, to add aspects of my other gifts to the mix here.  And what better time to get started.  The holidays are coming soon.  There will be tons of relevant stuff to share with you.  I don't wanna spoil the suspense, so just watch for the fun to start real soon.