This quick but delicious meal was an improvisation tonight!  It's not exactly Mexican, but the flavors are.  A California girl like myself should for sure know their way around the Mexican flavor palette well enough to improvise don't you think?   So even though this salad is very loosely related to Mexican Cuisine, it will not disappoint!  I promise you!  You will eat it once and your taste buds will be craving it on a date in the not-too-distant future.  The combination of mache (for munchability), chiles (for mild heat), avocado (protein and creamy texture) , lime (for tang), persimmon (for sweetness), and zucchini (for added substance) must be a match made in heaven, because they made a symphony of flavor in our mouths this evening at the dinner table! Make it with or without the chicken.  It will not disappoint!  Allow about 45 minutes leisurely prep time, most of which is spent at the cutting board. This is a low fat, low sodium, flavor packed meal under $20 serving 4.  What? 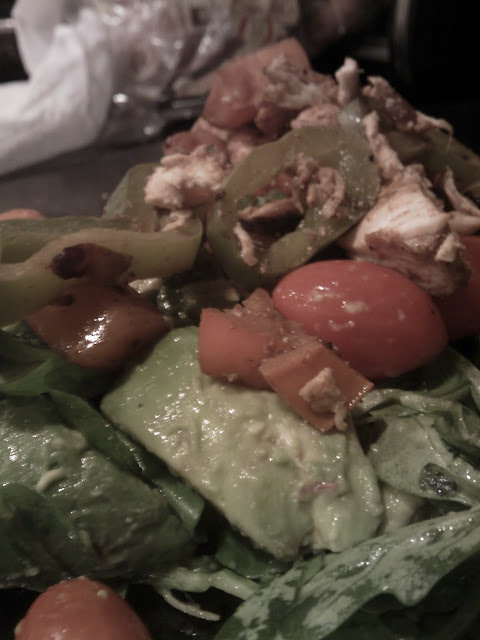 Avocado adds enough creaminess to this salad so that dressing is almost unnecessary!

Mache (Mache, also known as Lamb's Lettuce, field salad/lettuce, or in some countries it's called Corn Salad, has a tender, nutty flavor that works well in salads.  It can also be served steamed or sauteed as a vegetable. You'll find it in most larger groceries, and in almost every international grocery's produce section. Of course, I recommend your local farmers market....) Avocados  (Make sure the avocados you purchase are ripe, but not mushy.  They should give ever so slightly when gently pressed.  I usually by them before they are ripe... around two or three days before I want to use them.  If you find they are not ripe the day before you want to use them, put them in a brown paper bag with an apple and close the bag tight and leave for 24 hours.  Apples emit a gas that will speed up the ripening process.) Fresh Garlic (Can't beat garlic in the mix!!) Red Onion (Red Onions are closer to purple than red, but that's not so important.  They have a milder, less acid flavor than their brown counterparts, making them great for milder dishes where you don't want the onions to overwhelm.) Zucchini (Also known in some countries as Italian Squash, Zucchini is tasty and found in every grocery store. and farmer's markets.)  Anaheim Chiles  (Anaheim chiles, named after the California city, are generally mild and sweet with just a hint of bite.  They are not offensively spicy, but are a faint hint more heat than a sweet Italian pepper. They can be found pretty easily in all American grocery stores and farmer's markets.  In other countries, you can substitute sweet Italian style peppers, or in a pinch, red or yellow bell peppers.  Green bell peppers in this recipe will add a slight bitterness we don't want.) Fuji Persimmons  (If persimmons are not in season, you will not find them, simple as that.  There are, I believe, late fall, early winter fruits.  They are in season NOW!  (as of november 13) Now, I have to warn you of something very important here.   Fuji or Fuyu Persimmons are bright orange in color and look sort of like a squat tomato.  Their flavor is sort of a mild apple taste.  They  will be fully orange, but DO NOT soften when they are ripe.  They stay firm similar to the texture of an apple or pear.  BUT....There are more than one sort of Persimmon.  There is the Japanese Hachiya variety which is more elongated and has a pointed bottom.  This variety is inedible when it is not ripe.  When it is ripe it becomes soft.  THIS IS NOT THE KIND YOU NEED FOR THIS RECIPE. Be sure to get the Fuji/Fuyu Persimmons, or you will be sorry...) Limes (Look for medium sized fruits with smoother skins, even color, and a tiny bit of give when you squeeze them.  Also, as a general rule when I buy produce, I put my nose to the item and inhale deeply.  If it doesn't smell like lime, it's either old, picked too soon, or just not very good crop.  If you can't find good limes, get lemons instead for this recipe and only use half the amount.) Extra-Virgin Olive Oil  (Yes, this time you want extra virgin... the best you have.  For salads, I like to get olive oil that... well... taste the most like oil from olives.  My fave?  My favorite comes from the Santa Barbara Olive Co. local local local!  Means similar quality to those expensive imported ones but at a lower price if you buy it in L.A. You can find it in some L.A. stores like Whole Foods or Trader Joes, and it's also online. Olive Oil for use on salads should be first press extra-virgin so you get the unfiltered flavor on your salads.  You won't use much so don't panic about the price. It will last you a very long time  It's like wine.  You kinda get what you pay for...) Chipotle Powder (This smokey chili powder is found in the dried spice section of most grocery stores.  If you have trouble finding it you may substitute normal chili powder which is more common. DO NOT substitute paprika.  That's Spain.  Although related, it is not right for this dish.) Cumin  (ground cumin is found in your dried spice section of the grocery store.   It is the dried seed of a plant in the parsley family.  Not to be confused with coriander which is the dried seed of the cilantro plant.. also in the parsley family... speaking of which...) Fresh Cilantro  (Like I said... in the parsley family, you'll find this usually right next to the Italian parsley, to my chagrin.  Because grocers do this, you'll want to do the nose test... put your nose in the leaves and inhale deeply to make sure you have the Cilantro and not the parsley. Cilantro leaves do, however look silently different upon closer scrutiny.  Cilantro leaves are rounder than Italian Parsley, and usually has shorter stems.  Normal Parsley can be further differentiated by its slightly curly state.) Cherry or Grape Tomatoes (self-explanatory...)  Boneless, Skinless Chicken Breast (optional...) 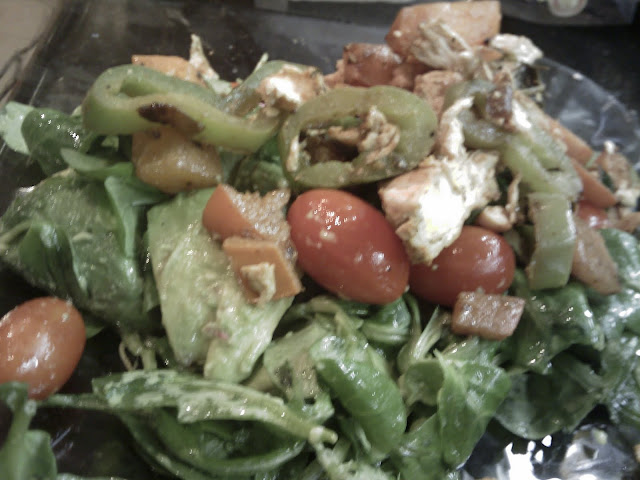 Get all of your ingredients washed and prepped before you start any assembly or cooking.

Wash Mache and Tomatoes and put in a wide and shallow salad serving bowl. Set aside until the rest of the ingredients are prepared.

Cut Zucchini lengthwise in 1/2 inch thick slices (remove stem ends), two or three slices at a time, lay them flat on cutting board and cut lengthwise again into 1/2 inch strips so now you've got 1/2 x 1/2 inch strips.  Stack those together and starting at one end cut into 1/2 inch cubes.  This is called a large dice.  Remember that.  You've been schooled! Set aside in a bowl.

Cut 1 Anaheim Chile across so that you have little rings of peppers.  Add to bowl w/zucchini.

Cut Onions also in a 1/2 inch dice.  Easiest way to achieve this is to cut a pattern of lines in one direction and then again in the other, making sure not to cut all the way through to the bottom of the fruit.  Then turn the onion on its side and cut slices across to make a dice.  Place in bowl with the Zucchini and Persimmons.

Flatten Chicken If you're not using chicken, skip to the Garlic.

Use your tenderizing mallet's smooth side (if you made the lemony vienna style chicken titties, you've got mallet, and you know how to use it),  flatten the chicken breasts between sheets of plastic wrap, til they are spread about double their size. Remove top plastic and grind a bit of fresh black pepper over it, and squeeze the juice from 1/2 lime over it.

Grill the chicken in a large, hot saute pan with about 2 tablespoons of olive oil and 2 cloves of crushed garlic.  While it's cooking on one side....(Turn chicken when breasts are golden on one side.  Only turn them once...When chicken is firm, golden, it is done. Squeeze juice from 1 1/2 limes over meant then... Remove to non-porous cutting surface to cool. If making vegetarian version skip the chicken and see below.)

Crush 2 Cloves of Garlic add to the hot pan (with 2 tbsp. olive oil if you haven't already added with chicken).

Add Cumin and Chipotle Powder and stir occasionally while the veggies cook just til they brighten in color and get a slight golden caramelization at the edges.

Don't cook til soft.  Everything should still have a bit of bite to it.

At this point, remove pan from heat, and...

Squeeze juice from 1 1/2 limes over the veggies and toss.

Remove from pan and spread on a plate to cool off for at least 10 minutes.

Once your chicken and your veggies are not steaming hot, it's time to assemble your salad.

Cut chicken into 1/2 inch pieces and mix with the persimmon and zucchini mixture.

Arrange your veggies (or your chicken and veggies) over your mache, tomato, and avocado mixture. 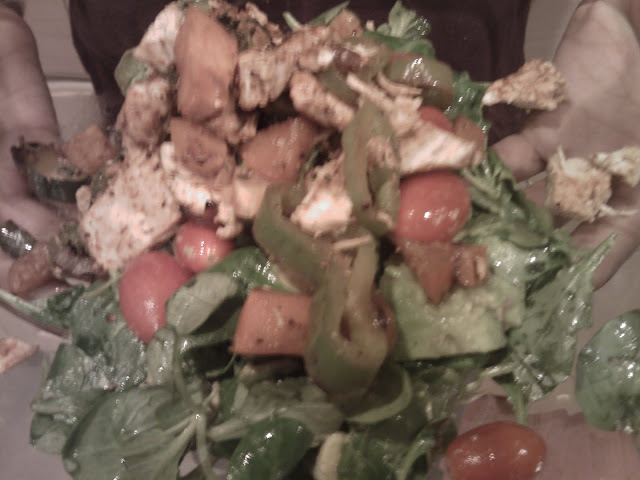