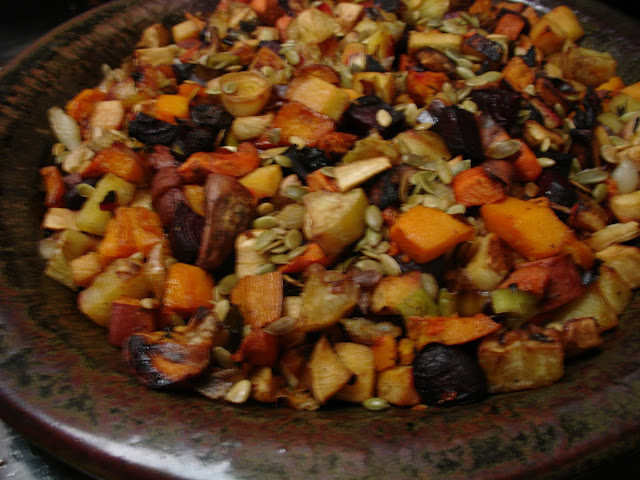 It wasn't until I had my child that I began to turn a corner in terms of how I felt about vegetables.  You could get me to eat almost anything raw.  But the only cooked vegetables I ever actually liked was green beans.  Perhaps it's because where my mother comes from, they cooked everything until there was no possibility of getting any sort of poisoning.  At the same time, unfortunately, all natural texture, color, fragrance, taste, and nutrients got  altered as well.  My mom loves to tell the story of how she'd find wads of soggy napkins full of spinach that I'd stuff in my pockets and smuggle out of the kitchen because I didn't want to eat it and I'd forget it was in the pocket and put the clothing in the dirty clothes hamper like that.

Anything other than legumes, I was never interested in eating if it was cooked.  Even the green beans, cooked in the same fashion as my grandmother cooked them, for hours, with a big piece of salt pork, long past when the heat sucked the green out of them, and they were more of a greyish green and if I remember correctly, slightly transparent!

There was a time in our historical past that there was the challenge of keeping foods fresh and safe to eat.   I believe that is where that long cooking technique comes from.  If you cook something long enough salmonella, ecoli, botulism, and other food-borne cooties would just surrender and die.  It also made it possible to perserve foods so they would last longer in the refrigerator.  Food was cooked in large batches on the weekend, and the same pot of beans, greens, or peas would be pulled out as a side dish every night for a week.  Crops were cooked then frozen and sometimes kept for months... or even longer... *horror music here*

The nutrients were so thoroughly extracted from the vegetables by this long cooking that the leftover broth was often saved and drank.  They called this pot liquor.

Then I grew up, and at some point discovered that it wasn't that all those vegetables were on their own just generally disgusting.  It was their preparation that was so unappealing to me.  I've eaten foods from alll over the world, and learned that with most vegetables, fresh and not overcooking is the key to delicious flavor.

I'm telling you all of this to say that you too might find that you will like vegetables more if you learn how to cook them in ways that the flavor is still intact and in some instances, such as this recipe, enhanced by cooking techniques and the addition of some simple staple ingredients that you probably already have in your pantry. 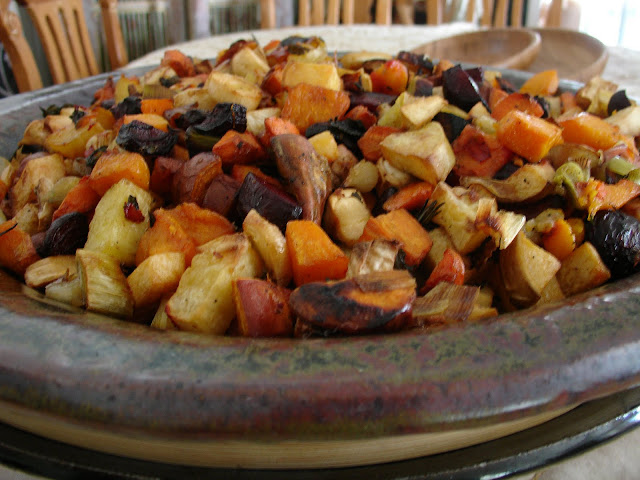 This recipe is SO easy that you will be able to do this blindfolded by the time you make it a second time.  Even the kids loved these vegetables, because some elements like the carrots, butternut squash, and the beets are sweet.  I will leave the amounts open to your discretion depending on how many people you want this to feed.  Of course if you can, get your veggies fresh at the farmer's market!!!  There will be a world of difference in the flavor!!  If you're wondering why there's sweet potatoes, and yams on the ingredients, they are not the same thing.  Scroll over the link to see the difference.   Note also, that I've listed Olive Oil, not Extra Virgin Olive Oil.  It's different.  The extra virgin will have too much moisture in it, and your veggies will not caramelize and will instead be oily and soggy. 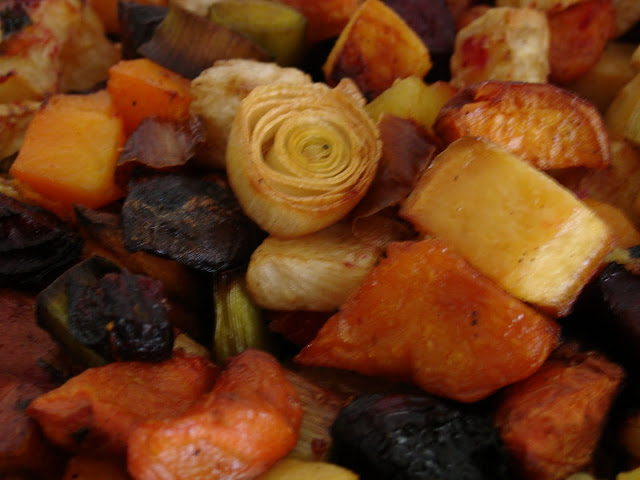 Drop your pearl onions into a pot of boiling water for 3 minutes.  Not longer.  Drain.


To peel them, cut off a small bit of the root end, then squeeze the other end so the white pearl onion comes out of its skin.


Cut the rest of your vegetables in 1 inch chunks.  Leave skin on everything except the Butternut squash.

Add a generous amount of herbs and enough olive oil to be able to thoroughly coat all of your veggies.

Mix everything together by tossing with large wooden spoons.

Spread your veggie mixture onto cookie sheets or jelly roll pans... (anything flat with low sides) in a single layer.  You may have to use more than one depending on how much you're cooking.   Don't try to crowd your veggies onto one pan.  It's important for them to caramelize and that won't happen if they are piled on top of each other.
Sprinkle a little salt and fresh ground pepper over everything and put it in the oven!


Allow to cook for 20 minutes (or until golden brown edges appear on the top).

Toss to turn over.

Allow to cook for 20 minutes longer or until veggies are golden brown at the edges and tender to the fork. 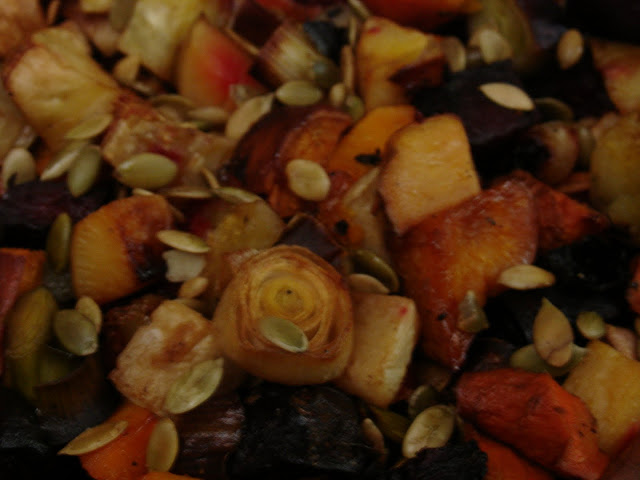 Remove and arrange on a platter.  If you like you can sprinkle pepitas over the top for a little extra salty crunch! 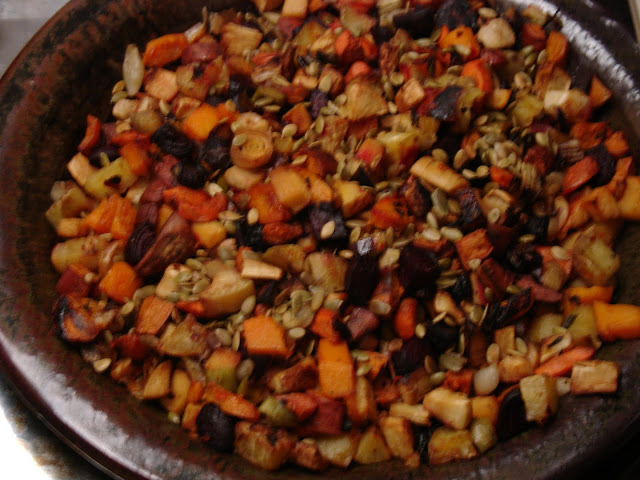